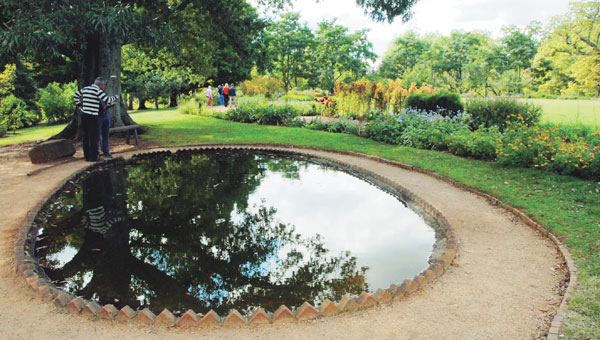 A fishpond is seen on the grounds of Thomas Jefferson’s Monticello as visitors make their way around the gardens of the plantation. THE TRIBUNE/JESSICA ST. JAMES

CHARLOTTESVILLE, Va., — If there could be an eighth Wonder of the Modern World, it would be Monticello, at least according to Bob Leith.

Leith, history professor at Ohio University Southern, and his motley group of history enthusiasts visited the architectural masterpiece on the last day of their Education on Location trip to Historical Virginia.

Monticello in Charlottesville, Va., was the home and final resting place of Thomas Jefferson, which sat in the center of a 5,000-acre plantation.

The extravagant home of third president and drafter of the Declaration of Independence was a 40-year project, which Jefferson called his “essay in architecture.”

As the OU group toured the Monticello, it became clear that the home is not only a marvel in architecture, but also a celebration of art, science, literature and nature.

“He just had such a great mind in so many areas, Indian relations, science, language,” said Leith about Jefferson.

The entrance hall alone boasted a museum of Indian artifacts from Lewis and Clark’s expedition, fossils of extinct North American animals, antlers and skins, busts of French Enlightenment figures such as Voltaire and Turgot, and Jefferson’s own “Great Clock” that he designed with weights that lower to show the days of the week.

Jefferson’s book room was home to nearly 7,000 volumes at its peak. The OU group saw a portion of those books, some of which were law books, encyclopedias, dictionaries, Greek and Latin classics as well as Shakespeare.

Jefferson said, “Music is the favorite passion of my soul.”

The OU group saw the parlor where Jefferson played his violin. There was also a harpsichord, pianoforte and art adorning the walls. Jefferson hung paintings of John Locke, Isaac Newton, Sir Walter Raleigh and Francis Bacon.

“It was so amazing being where Jefferson was,” said 27-year-old Chrisa Hayes. “I thought the inventions were really neat, to see how he called for his servants by the bell.”

Hayes went on her first trip with OU for fun.

“It’s worth every penny. I feel like you get a lot more out than you put in funding wise,” she said.

The OU group was also able to see how another Colonial president lived in a much more modest way.

James Monroe, fifth president, resided about two miles away from Monticello at Ash Lawn-Highland. Monroe and Jefferson could see each other’s homes in the fall when the leaves fell away from the trees.

Monroe’s modest “cabin castle” once set upon 3,500 acres, but now only comprises about 535 acres.

The OU group had a guided tour of Monroe’s home, seeing where he entertained guests in the drawing room, where he and his family slept, the dining room where they ate, the kitchens where Monroe’s slaves prepared meals, the plantation office and slave quarters.

“When you think of those presidents, George Washington’s Mt. Vernon, John Adams’ Braintree, Jefferson at Monticello, they were all pretty well known, household names,” said Leith. “James Monroe wasn’t as extravagant in his furnishings and the size of his house, even his acreage.”

The group from OU was able to experience some 200 years worth of history in three days, from Jamestown and the first English settlement, to the American revolt in Williamsburg as well as Jefferson and Madison’s post-American Revolution homes.

“If you stop and think about it, if you weren’t so weary and tired, you got to see a lot of different things about early American life,’ said Leith. “Housing, we talked about food, we saw arms and military things, heard cannons being fired, music. That’s quite a spectrum to watch.”

Three former students of Leith who are now educators were along for the trip. All agreed that Leith’s OU history trips are a valuable educational experience.

“I think it brings the realism of history to life because you’re actually on site,” said Patrick Stout, director of instruction for Gallia County Schools. “I think the kids, when they visualize it, they see it they hear it, they understand it a little better.”

Silas Johnson, Principle of Addaville Elementary School in Gallia County said, “It’s a wonderful way to extend the classroom. If an instructor is lecturing on certain things, this is a way for them to actually see the various things that they have been talking about and to see how everything falls into place.”

Principal of River Valley Middle School in Gallia County, Dave Moore, said, “I had a chance to walk down history. It was really neat. It gives kids the opportunity to see what history is all about, to re-live it.”

Most on the trip agreed that living history tours help to reinforce what is taught in the classroom.

“It gives you a more personal perspective on what daily life was like. Not just the key points of what happened, but the day-to-day life,” said Lisa Walters. She is a history major at OU.

“It’s harder to understand what you’re seeing or what they went through when you read it in a book, especially in a textbook. They’re kind of dry,” she said.

“It stays in your mind more when you can see it. It’s not just something on a flat page, said Sonja Butcher. She and her 15-year-old grandson, Garrett, took the trip together.

“It just nice to step back in time, to see where we are now and where we came from. And this is the best way to show him.”

Leith and Travel World are already planning a trip for May 2011. The next trip will tour Civil War sites for the 150th anniversary of the war.

Leith said he hopes people will continue to want to go on the OU trips that Travel World organizes. Travel World is a full service travel agency that organizes the historical trips for OU as well as any other kind of destination for the university or the general public.

PROCTORVILLE — As a child, Judy Reed enjoyed spending her days writing and sometimes even drawing illustrations for her works.... read more