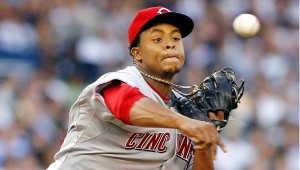 Edison Volquez will be the starting pitcher for the Cincinnati Reds against Roy Halladay and the Philadelphia Phillies in the NLDS first game. (MCT DIRECT PHOTO)

The Associated Press
PHILADELPHIA — Roy Halladay spent plenty of Octobers at home, wishing for this opportunity.

The ace right-hander has been to seven All-Star games, won a Cy Young Award, pitched a perfect game and compiled an impressive resume over his 13-year career. But the one thing he hasn’t crossed off his to-do list is pitch in a postseason game.

Halladay will take the ball when the Philadelphia Phillies host the Cincinnati Reds in Game 1 of their NL division series Wednesday.

“It’s definitely something I’m looking forward to,” Halladay said on a rainy Tuesday. “It’s a great challenge. It’s something I’ve wanted to do my whole career, and I’m very grateful for the opportunity.”

Edinson Volquez will start for the NL Central champion Reds, who are in the playoffs for the first time since 1995. Volquez came back from right elbow surgery and went 4-3 with a 4.31 ERA in 12 starts.

“For me, it’s something really big,” he said. “I was out for one year and came back from Tommy John surgery. This is the first game of the playoffs. It’s something big. Really big.”

After 12 seasons playing for Toronto in a division dominated by the New York Yankees and Boston Red Sox, Halladay desperately wanted to join a legitimate contender. He nearly got the chance last year, but a trade to Philadelphia fell through before the July 31 non-waiver deadline.

The Phillies acquired Cliff Lee instead and he nearly led them to a second straight World Series title. Lee was 4-0 with a 1.56 ERA in five postseason starts, getting the team’s only two wins in the World Series against the Yankees.

Halladay watched the Series with more interest than usual because he was nearly a part of it, and to see his former teammate, A.J. Burnett, pitch for New York.

“You’re always catching up on it. You may not sit and watch every single inning like I probably did last year,” Halladay said. “I think everybody who is not there is envious of the guys who are.”

Halladay was so intent on playing for a championship-caliber club that he passed up a chance to test free agency after this season and potentially get the richest contract ever for a pitcher. Instead, the big right-hander signed a $60 million, three-year extension from the Phillies after they completed a trade with the Blue Jays last December.

“The contract was never a factor for me,” he said. “The biggest thing for me was going somewhere that had a chance to compete for a couple years, and being able to do that as soon as possible. You never really know how long you are going to play. You hate to suck up a year just to be able to control exactly where you go, when you can already go there before that. The biggest factor was there was this team, the one team that I really wanted to go to that was able to make things work. I have a chance to win right away, and not only right away, but hopefully have a couple chances at it. It was a simple decision.”

Halladay lived up to enormous expectations in Philadelphia. He threw a perfect game at Florida on May 29 and finished 21-10 with a 2.44 ERA. Halladay led the majors in wins, complete games (nine), shutouts (four) and innings (250 2-3).

“I could sit here forever and talk about Halladay,” Phillies manager Charlie Manuel said. “He’s very dedicated, he’s very intense, he wants to win, he definitely wants a ring. He wants to be the best pitcher in baseball, but he also wants to be on the best team. He definitely puts his team before himself, and he’s definitely inspirational to all of our players and he plays a big role in the makeup of our team.”

On almost every other staff, Halladay would’ve been an obvious choice to start the series opener. But the Phillies also have Roy Oswalt (13-13, 2.76) and Cole Hamels (12-11, 3.06). Both pitchers would’ve had better records if they received more run support. More importantly, both have been successful in the postseason.

Hamels was the NLCS and World Series MVP when the Phillies won their second championship in 2008. Oswalt is 4-0 with a 3.66 ERA in eight postseason games, including seven starts. Oswalt is starting Game 2 on Friday and Hamels will pitch in Cincinnati in Game 3 on Sunday.

The Phillies, who led the majors with 97 wins, chose to have an extra day off in the series so they could use a three-man rotation and have each pitcher get his normal four days of rest. The three aces make Philadelphia a prohibitive favorite to reach the World Series and become the first NL team in 66 years to capture three straight pennants.

“I don’t really enjoy the underdog role, but that’s the role that you’re cast upon, and that is the role that you serve,” Reds manager Dusty Baker said. “These guys are the incumbents, so, naturally, we should be the underdog. Plus, we haven’t been here in a long time. It doesn’t matter what people think. At this point we’re one of the elite that are still standing. As long as you go to the dance, as they say, you’ve got a chance.”

The Associated Press COLUMBUS — All of Ohio was on edge on Saturday afternoon and it had nothing to do... read more