Students sit in for sitar demonstration 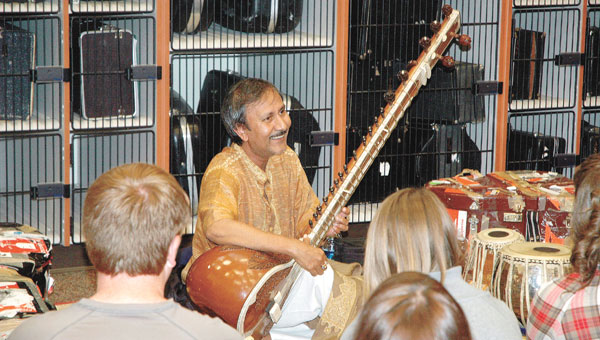 Sitting on the floor of the Ironton High School band room, a small group of students experienced classical music like never before.

On Tuesday, 42 bands students were introduced to some exotic new instruments, the sitar, a 20-stringed instrument, and a pair of hand drums called tabla.

Sandip Burman, a native of Durgapur, India, tours the world playing the tabla and sitar, and has given solo performances at the Kennedy Center, First Night Providence in Rhode Island, Ravinia Festival in Chicago and Nashville Symphony.

On Burman’s last day of his U.S. tour, he made a stop at IHS to demonstrate music fundamentals on his sitar and tabla. Burman sat on a rug while the students crowded around him, mesmerized by his quick hands.

“We really struck gold with this, just by chance,” said Will Smith, assistant band director at IHS.

Smith said the Burman contacted the school to have an intimate gathering hear him elaborate on the classical music of India.

As he played his sitar he showed that even though the sounds are different, the “ingredients are the same.”

Burman also played the tabla while the students clapped along in different rhythms.

“If you practice enough, you learn a lot,” said Burman. “It’s always a learning process.”

Burman also said he has been playing music a long time.

“I’m still trying to be a musician,” he said.

Some of the students had either never heard a sitar or seen one before Tuesday.

“It was amazing how the complexity of the instrument, of the sitar, even though it got way more complex than a normal guitar, he could still play just as fast if not faster than most guitar players can,” said Zane Rapp.

Zane is a junior at IHS and plays the mellophone in the band. He had never heard the sitar before Burman played for the group.

Freshman Katie Barron said, “It was cool to learn about another country’s music.”

Even though Burman played music that the students were not accustomed to, Smith said he thought the message translated the same.

Foodbank to give away produce Thursday