From hospital to house lots 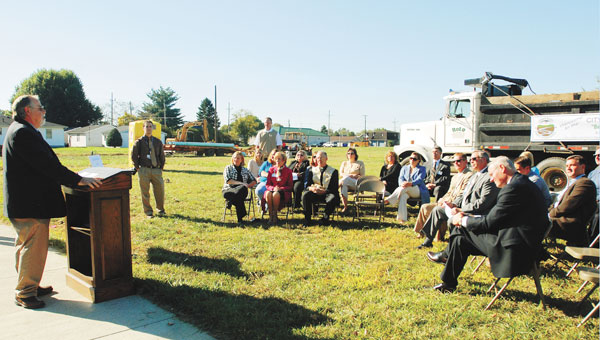 It was the site of a building that met the medical needs of Ironton residents. Now the site of the former Lawrence County General Hospital on Eighth Street in Ironton will meet another need for the city: The need for residential lots.

County, city, and state officials, met Thursday morning for a ceremony to mark the transfer of the property from Our Lady of Bellefonte Hospital to the Ironton Port Authority. The land will be sold for residential use.

For the past four years, and with the help of a $750,000 Clean Ohio grant, the IPA has worked to develop the property into housing lots.

“(This project) demonstrates what can be done well intended organizations and the city and the state come together,” Dickens said.

Also present at the ceremony was OLBH CEO Kevin Halter, who said he was glad to be a part of the many good things that are happening in Ironton.

“None of us had any idea how difficult it would be to take a building down of this size and we learned a lot from it,” Halter said.

“It’s a piece of flat land that you can build on. That’s rare in this community,” Kline said, adding that the residential lots could help keep young professionals in the area.

“This is not all the answer but I think this is a start,” Kline said.

Tom Mignery, of Burgess & Niple, an engineering and architectural firm, signed off on the project, assuring that it was clean for residential use.

“Some of the challenges we addressed were the medical waste, solid waste and asbestos,” Mignery said after the ceremony. “We worked with the Ohio EPA to address their concerns as well as mine. It’s a great day.”

“This is one of the first ones through the Clean Ohio program,” he said. “It might have been the second in Ohio. It’s the first in Southern Ohio.”

The port authority is still completing infrastructure work including reestablishing the alley between Eighth and Ninth streets as well as a storm drain, relocating a water line and replacing several hundred feet of a sanitary sewer line.

IPA plans to start selling the lots within the next few weeks, Dickens said after the ceremony.

‘A New You Salon and Spa’ grand opening Saturday

They started out as grade school friends, and Kayla Mullins, now 23, and Ashley Kellogg, now 22, are able to... read more