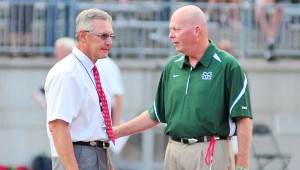 The Associated Press
COLUMBUS — Jim Tressel has been the head coach at Ohio State for a decade of success — yet few know much about him when he’s not wearing that vest and a tightly knotted tie on the sideline.

He bats away questions about himself and his emotions like mosquitoes at a picnic.

On Saturday against Indiana, his second-ranked team can give him his 100th win with the Buckeyes. He dismisses any consideration of the accomplishment.

“I’d rather have a sixth (win this season) than 100,” he said. “I guess you can’t have one without the other, so I guess it would be neat. But we would reflect on that for about 3 minutes and then get ready for the next game.”

Even when the subject is his greatest triumph — the dramatic double-overtime victory in the 2003 Fiesta Bowl that gave Ohio State its first national championship in 34 years — he is dismissive.

“You are testing my memory. You know, I have not watched that game,” he said to disbelieving reporters. “Someday I’ll invite you all over and we’ll sit in our rocking chairs and we’ll break that game down and I’ll tell you what I was thinking, if I can still think by then.”

Tressel, who turns 58 on Dec. 5, lives in a large French provincial home in the tony suburb of Upper Arlington with his second wife, Ellen. They have four adult children in their blended families. They have dogs named Scarlett and Gracie, Ellen is an avid golfer and both are active in local and national charities.

He is a product of his father, Dr. Lee Tressel, a hall-of-fame college coach at Baldwin-Wallace. There’s a quiet, tree-shrouded lane in the college town of Berea, Ohio, named Tressel Street, but it’s in honor of the father’s life and victories. A cerebral coach who always wore a bow tie and a buzzcut, he won a small-college national championship with the Yellow Jackets — and raised three sons who went on to follow in his footsteps as coaches. Jim played quarterback for him at B-W.

Dick Tressel, Jim’s older brother and his running backs coach at Ohio State, says there’s a trickle-down theory, from father to sons, that is still in force with the Buckeyes.

“All along, Jim has understood how important defense is to win championships. But he’s been a quarterback all his life. He understands the game really well, but he has this passion for the offense and understanding it really well and knowing how exciting that part of it is,” Dick Tressel said. “He’s always been an educator in the game. Football’s a class, football’s a place to learn. You learn by competing at the highest level you can and learning life lessons in your favorite subjects.”

Jim has been a head coach for a quarter of a century — the first 15 years at Youngstown State, where he won four Division I-AA playoff championships. He offers very little introspection on his career.

“Does it seem like it’s been 25 years?” he repeated. “I was told long ago when I first got a head coaching job, that a head coaching year is like a dog’s year — it’s worth seven. So does it feel like it’s 175 years or whatever? No, it doesn’t feel quite that long, and honestly, it goes fast.”

His players often don’t know what to make of him. He can be stern and unbending, but he is also a friend and mentor.

“My friend back home always asks me, ’How’s old Jimmy doing?”’ starting linebacker Brian Rolle said with a wide grin. “Ever since high school, he’s always asked, ’How’s Jimmy doing?’ I tell him coach Tressel is sort of like my high school coach was: A guy you can talk to a lot. (Coach Tressel) doesn’t yell a lot; he doesn’t have to because guys respect him. He’s a guy that I talk to like he’s one of my best friends. I walk into his office and say, ’What’s up coach Tress?’ and we talk 5 or 10 minutes about nothing, just a normal day.”

But there are still limits.

“I wouldn’t think of calling him Jimmy,” Rolle said with a laugh.

Offensive lineman Bryant Browning remembers the times Tressel has been out of his straight-laced character.

“He dances in the locker room from time to time,” he said. “It was kind of a, well, a smooth, little rock to the beat, I guess.”

He added, “He’s no Michael Jackson.”

Ohio State’s cornerbacks coach, Taver Johnson, said what makes Tressel so appealing is that you know what you’re getting.

“For sure in the four years I’ve been here, he’s the same,” he said. “That part of it always makes you as an assistant coach feel that you can get your job done. Because he’s not an overbearing person, not all over the board, not an overseer. He expects you to get your job done. He doesn’t have to give you a checklist.”

The game and the kids aren’t quite the same as they were when Tressel graduated from Baldwin-Wallace in 1975 and set off to make a name for himself as a coach.

Tressel is 99-21 at Ohio State, and 234-78-2 overall, with a winning percentage that ranks among the best of anyone to ever coach at the college level. He recruits great players, although at first glance he doesn’t appear to be a guy who can relate well to 18-year-olds.

But he is clearly more than a micromanager who speaks in circuitous “Tresselese,” more than the “Senator” as he’s derisively called for his ultra-cautious behavior and language.

“There’s a lot of coaches out there who are just used-car salesmen,” defensive end Cameron Heyward said. “They’re just trying to sell a product or something. With Tress, he’s just a guy of his word and he really cares about his kids.”

Last spring, Tressel signed a two-year contract extension that will pay him roughly $3.6 million a year through the 2014 season.

He enjoys coaching, but no one knows for certain how long he’ll continue at Ohio State. Like much of his personal life, that’s something he never reveals.

Reds looking to even NLDS against Phillies’ Oswalt