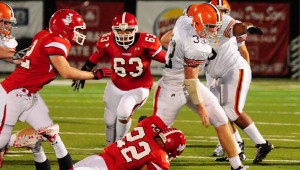 JACKSON — The Ironton Fighting Tigers went into Friday’s game short-handed, got short changed during the game and left the game on the short end.

In an exciting and suspense-filled game, the Jackson Ironmen escaped the depleted Fighting Tigers 26-19 in triple overtime.

In what would be an ESPN instant classic, both teams had chances to win before Jackson finally came away with the win.

“Our guys gave a great effort. I can’t fault them for how they played, especially in the second half,” said Ironton coach Bob Lutz.

“You can’t put the loss on any one play or any one player. We had chances and didn’t make a play when we needed.”

One play that Ironton (5-2) appeared to have made was in the first overtime. On a fourth-and-1 at the Jackson 11, fullback Brian Warner crossed the 10-yard line for what seemed to be a first down.

But the lineman on the Jackson sidelines marked the ball where Warner was pushed back instead of his forward progress. Instead of a first-and-goal, the teams went to a second overtime.

Ironton used seven plays and Tyler Hager scored on a fourth-and-1 for a 19-13 lead. But the conversion kick failed and the defense was put to the test.

Jackson (6-1) got a 16-yard pass to the Ironton 4 and two plays later Klay Arthur scored from 1-yard out to tie the game. But Jackson also failed to convert its extra point kick and the teams went to a third overtime.

Again Jackson began with a pass, this time for 12 yards. A pass on the next play was incomplete, but Drew Ervin ran for 7 yards and quarterback Kip Winchester kept the ball for the final yard and the lead.

Luke Eisnagle kicked the extra point and it was 26-19.

Ironton attempted a pass on its first play over the overtime as Jake Rawlins came open in the end zone, but Tyson McNelly came up with an interception at the 3-yard line to end the game.

The Fighting Tigers were without the services of leading rusher and starting cornerback Tres Wilks who was ejected last week on a retaliation play.

Starting end and corner Michael Lawless did not dress, nor did backup running back and defensive back Dion Brown. Two-way lineman Robbie Webb spent periods of the game vomiting and missed the third overtime due to exhaustion.

Fullback and linebacker Brian Warner did not play on a Jackson scoring drive just before halftime due to an injury.

“We cleared a few things up at halftime and played better. We had a lot of younger guys playing and our inexperience showed,” said Lutz.

“You can’t make excuses. You play with what you’ve got and our guys played hard. Right now, we just need to get healthy.”

Ironton scored on the third play of its first possession when Warner caught a pass from Tommy Waginger and turned it into a 72-yard scoring play and a 6-0 lead.

Jackson got within 6-3 on a 22-yard field goal by Luke Eisnagle.

After an Ironton punt, Jackson drove 73 yards in nine plays with Arthur scoring from 4 yards out on the first play of the second quarter. Eisnagle’s kick put Jackson up 10-6.

Jackson used a 57-yard kick-and-roll punt to pin Ironton back on its 3-yard line and got the ball back at the Ironton 49.

With Warner sidelined, Jackson got to the 4-yard line and Eisnagle kicked a 21-yard field goal with six seconds on the clock and it was 13-6 at the break.

The Fighting Tigers took just two plays to score starting the second half. Warner ran 10 yards for a first down and then Trevor White bolted 51 yards for the touchdown. Jon Williams kicked the conversion and the game was tied.

Jackson was attempting to drive for the winning score near the end of regulation when linebacker Brandon Leach picked off a pass with 1:24 left.

Ironton got to a Jackson 37, but a procedure penalty created a third-and-long and Waginger was sacked for an 11-yard loss and sent the game to overtime.

White finished with 91 yards on just eight carries and Warner had 42 yards rushing and 92 receiving. Waginger was 4-of-9 for 105 yards.

Arthur was the workhorse for Jackson as he carried 37 times for 164 yards.

SCIOTOVILLE — The Symmes Valley Vikings decided against a jump-start. They went with a kick-start instead. The Vikings got off... read more