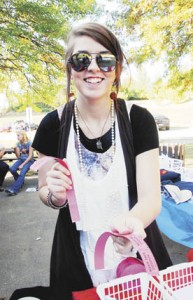 Charli Bowman hands out raffle tickets for many various drawing during a benefit for Sgt. Justin Allen Saturday at Paul Porter Park. THE TRIBUNE/JESSICA ST. JAMES

COAL GROVE — Those who knew Sgt. Justin Bradley Allen will never forget him and a few of his friends are making sure he has a lasting legacy at Dawson-Bryant High School.

The first fundraiser for the Justin Allen Memorial Fund was held Saturday in Paul Porter Park in Coal Grove.

“We got started a little late. There was an Ohio State game so we’ve got some late arrivals,” Cody Chaffin, who coordinated the event, said.

But while they may have had a late start, Chaffin said he has been impressed with the support from the community.

“We had a lot of support,” he said. Adding that several community members have donated money, food and other items for the benefit.

Chaffin didn’t yet have total for the proceeds from the day.

The money raised from Saturday’s event will go toward a memorial for Allen that will be put at Dawson-Bryant High School. The cost of the Fallen Soldier Memorial Sculpture is $5,000. It will also benefit a scholarship that will be given to a Dawson-Bryant senior.

Sgt. Justin Bradley Allen died in July while in the line of duty in Afghanistan. The Dawson-Bryant High School Class of 2005 graduate was serving in the Army Rangers at the time.

Several bands played music throughout the day. A silent auction and raffle as well as a corn hole tournament brought in funds for the memorial.

Justin Allen’s brother, Brian Allen, said he has been overwhelmed with the support his family has received from the community. Allen has been involved in planning the benefit.

“(It’s been) more than I ever dreamed it would be,” Allen said. “I still hear about it in different news media. Everywhere you go people know who you are and who your brother was. It’s just been great. The outpouring for the funeral and viewing was unbelievable. I’d never seen anything like that before,”

Allen’s parents, Roger and Bonnie, came to the benefit concert for a while, but left to entertain visiting family members.

“They really appreciate all that’s been going on,” Brian Allen said.

If all goes as planned, this will not be the only benefit held in Justin’s honor for the memorial and the scholarship. Allen said the group has discussed several ideas for future events like a golf tournament, a 5k run, poker run and a softball tournament.