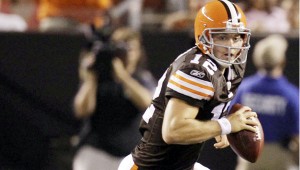 The Cleveland Browns need you now.

At this point, the Browns have few other options.

“It’s only the Steelers, right?” Mangini said with a perfect touch of sarcasm. “Coming off a bye week? They don’t blitz much.”

Once again, the Browns’ quarterback carousel is in overdrive. When isn’t it?

The Browns have used 15 different starters at quarterback since 1999. For comparison’s sake, the Indianapolis Colts have used one.

Mangini may have no other choice but to play McCoy after Wallace sustained what appeared to be a severe ankle injury in Sunday’s loss to Atlanta and Delhomme came in and appeared to re-injure the badly sprained right ankle that sidelined him for three games.

Following the game, Delhomme walked with a noticeable limp. Wallace was much worse. He could barely make it to the shower, and family members who had been waiting in the corridor outside Cleveland’s locker room to see him, were brought to his cubicle.

Mangini, who guards injuries like a leashed pit bull, would not provide an update on either player. He refused to say if Delhomme had suffered a setback. He said the team was awaiting test results on both QBs and that he would have a more definitive answer on the team’s direction by practice on Wednesday.

“Believe me, there’s a lot that can happen between now and Wednesday with Jake, with Seneca, with roster moves,” Mangini said. “There’s a a lot of moving parts here, so it’s hard for me to give you anything that definitive because there’s nothing definitive to give right now.”

There was moments later.

Shortly after Mangini met with the media, the agent for quarterback Brett Ratliff confirmed the Browns will re-sign his client off New England’s practice squad.

Agent Joe Palumbo said in an e-mail to The Associated Press that Cleveland is bringing back Ratliff, who spent last season with the Browns after coming over in the 2009 draft-day trade with the New York Jets. Ratliff was Cleveland’s No. 3 quarterback for 14 games and the backup for two.

ESPN.com first reported the Browns would sign Ratliff to back up McCoy against the blitz-crazed Steelers.

The Browns did not announce any moves, and a spokesman said the team “would not have anything today.”

Although Ratliff is on the way, Mangini seems poised to give McCoy, the former Texas star, his first big break as a pro. After Delhomme got hurt in the season opener, McCoy served as Wallace’s backup for three games and now could be thrust into the starting lineup against one of the league’s toughest defenses.

Mangini is prepared to play McCoy, who was expected to go higher in April’s draft but slid to the third round, if he has to.

“They’ve played football their whole lives and a situation like Colt’s, he has been a very successful quarterback for a long time. I’m sure he’s chomping at the bit to get his first chance to do that.”

Mangini pointed out that rookie safety T.J. Ward couldn’t wait to get on the field and that McCoy, whose 45 wins with the Longhorns are the most in NCAA history, is no different.

“If you didn’t have that guy, then you drafted the wrong guy,” Mangini said. “If he’s sitting at home at night curled up in a blanket hoping he doesn’t get the start, you’ve got the wrong guy. You look for that competitiveness. You want the young guys to always be pushing the guy in front of them, saying, ’Come on, move out of the way, give me my chance to do it.”’

Mangini said McCoy has taken “quite a few” snaps with Cleveland’s first-string offense since Delhomme got hurt.

McCoy struggled through much of the preseason but finished strong. In Cleveland’s final exhibition against Chicago, he completed 13 of 13 passes for 131 yards, but was sacked three times.

The last Browns rookie QB to start against Pittsburgh was Charlie Frye, who was sacked eight times in a 41-0 loss in 2005.

“I know Colt,” he said. “In practice he plays a lot, and he does well against our defense. I know he’ll study hard and get focused. He just loves to play the game, so he’s looking forward to it. Honestly, he’s not afraid at all. He wants to be out there on the field.”

Bengals must keep digging way out of current problems