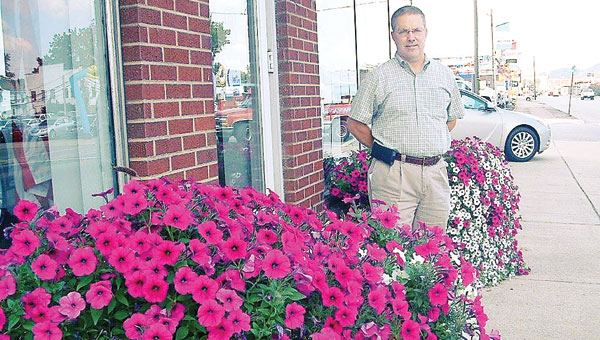 Bob Clyse has supported Ironton In Bloom with both monetary donations and by participating in their beautification plans for the downtown area.

As the growing season draws to a close, Ironton In Bloom, Inc. is increasing its efforts to raise the several thousand dollars needed to pay off this summer’s contract to the greenhouse that has had the enormous task of planting — and keeping beautiful — the downtown pots and hanging baskets.

This has been no easy task throughout a summer that was one of the hottest on record. And what a magnificent job they have done.

The blossoms have drawn praise from both citizens and visitors alike.

“I see them down here watering with their trucks about every two days,” said Bob Clyse, owner of Bob Clyse Chevrolet Buick GMC automobile dealership on Third Street.

Linda Holt, receptionist at Clyse, says they get many compliments from customers coming through the door that is flanked by two large pots of petunias.

“I live in Ashland, but I just love looking down the street at the flowers,” she said. “They make you feel cheerful. They say, ‘We care about our town.’”

Bob Clyse has been a generous supporter of Ironton in Bloom since its inception.

He has an arrangement with the volunteer organization to both plant and maintain the pots in front of his business.

“I’m thinking we’ll need two more next summer, and I don’t know if we would remember to water them on our own,” Bob said.

Ron Henderson, who is manager of Park Avenue Apartments and another supporter, worked with Ironton in Bloom to have wall planters mounted on the old Marting Hotel and along its parking fence.

His employees do all the watering and maintenance when they take care of plants they themselves put at the front entrance.

Barb Click, office assistant and resident of the 50-apartment building, says both employees and residents enjoy the blossoms lining the streets.

Patricia Franks, a resident since 2008 and a regular biker around town, says that the floral display makes her biking much more enjoyable.

“Much better than concrete and more concrete!” she said.

He points out that the large windows in the spacious apartments allow residents to enjoy the flowers inside as well as out.

“This is just what we love to hear. Beauty will draw people,” said Judy Sanders, residential chairperson for Ironton in Bloom.

Carol Allen, the group’s leader, says that although individual contributions are up, “contributions from businesses are down this year to the point that continuing the program the way we have been is in question.

“We have already had to quit watering two weeks before time to plant pansies to cut costs. You can already see the results of this.”

Allen hopes businesses, not only in town but those around the tri-state, realize that beautifying the town is “an economically smart thing to do and has the capacity to enhance business prospects for everyone.”

Will what some Ironton City Council members consider to be an unsafe intersection be established as a three-way flashing red... read more