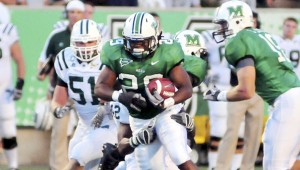 Marshall running back Martin Ward tries to run through a tackle by an Ohio Bobcat player. The Herd hosts Central Florida Wednesday night in a Conference USA game. The game has been called a “White Out:” with the fans wearing white and the players will be wearing an all-white uniform combination. The game will be televised by ESPN. (The Ironton Tribune / Kent Sanborn of Southern Ohio Sports Photos)

O’Leary is also telling his players to expect a fight out of the Thundering Herd (1-4, 0-1 Conference USA) when Central Florida (3-2, 1-0) is showcased on national television for the second straight week on a Wednesday night.

Forget that three of Marshall’s four losses have come by double digits. O’Leary is paying particular attention to how Marshall was tough at home against No. 25 West Virginia on Sept. 10.

Marshall led 21-6 midway through the fourth quarter before the Mountaineers twice drove more than 95 yards for touchdowns that sent the game into overtime and they won 24-21.

“As I told our team, I said just take out the West Virginia film,” O’Leary said.

“That’s what kind of capabilities they have to play at and I think that’s the effort that we’ll get.”

Marshall beat UCF from 2002 to 2004 when the teams were members of the Mid-American Conference. But UCF has won all five meetings since the schools switched to Conference USA in 2005.

“I don’t think there will be a lot of handshakes,” O’Leary said. “It’s a big conference game.”

Like the West Virginia meeting, Marshall is looking for a charged atmosphere at Joan C. Edwards Stadium. Marshall will wear its white road uniforms, is giving away T-shirts and encouraging fans to wear white, and is offering free and discounted tickets to pack the 40,000-seat stadium.

Whether that energy transfers to the field remains to be seen. For much of the season, Marshall has struggled on both sides of the ball due in part to a young roster. Holliday already has been forced to use a dozen first-year players.

Marshall is coming off a 41-16 loss at Southern Miss in which the Thundering Herd punted on their first seven possessions and crossed midfield just once.

Things may not get any easier against the Knights.

UCF’s defense has given up four touchdowns each by rushing and passing and allows 265 yards of offense per game. All are conference bests. The Knights figure to tantalize a Marshall running game that ranks near the bottom nationally.

“How do you establish the run? You block them better,” Holliday said. “We have to become a more balanced offense. We spend a lot of time in that meeting room to find ways for our offense to be successful. We all know being one dimensional is not one of those ways.”

Marshall has been hit-and-miss in the passing game, too.

Brian Anderson went just 7 of 16 for 30 yards at Southern Miss. He was pulled for backup A.J. Graham, who completed 10 of 12 passes before injuring his right ankle.

Graham has been ruled out for Wednesday’s game, meaning Anderson will get his 20th consecutive start. Anderson has been solid at home, completing 41 of 59 passes for 524 yards and six touchdowns with no interceptions in two games this season.

O’Leary has been rotating freshman Jeff Godfrey and Rob Calabrese at quarterback with success.

Holliday, a former assistant coach at West Virginia, said he tried to recruit Godfrey, who leads UCF in rushing at 57 yards per game and is averaging 106 yards through the air.

Godfrey “is giving them a whole new dimension on offense,” Holliday said. “Where he creates issues is when he improvises. We have to try and contain him and do a good job of keeping him in the pocket.”

The game will feature two of the conference’s top defensive ends in UCF’s Bruce Miller and Marshall’s Vinny Curry, the nation’s sack leader with eight.

Marshall knows all about Miller, the 2009 conference defensive player of the year.

In the fourth quarter last year, Miller stripped the ball from Anderson, UCF recovered and eventually scored the go-ahead touchdown with 23 seconds left in a 21-20 win. That started a six-game conference winning streak.

“That play was the difference in our season,” O’Leary said.

The Knights have made big plays a mainstay on defense this year, forcing three turnovers in last week’s 42-7 win over UAB. Two of them were returned for touchdowns.

“Our defense has been pretty stingy since we’ve been here,” O’Leary said. “We’re not as stout up front as we’d like to be. But they’re getting off of blocks and making a lot of plays and making a lot of third-down plays, which I think is critical if you’re going to be off the field.”