Are you afraid of ghosts? 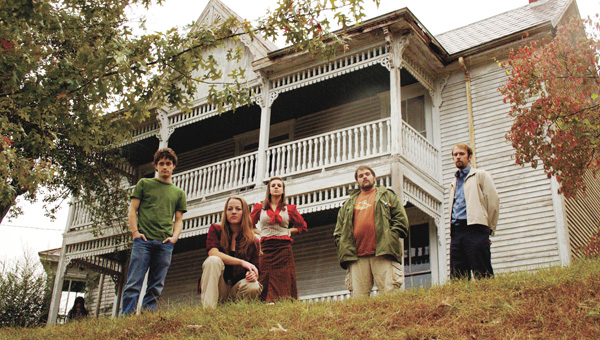 For the past four years, Mickey has written and directed a Halloween themed show for Jenny Wiley Theatre, including “The Legend of Sleepy Hollow,” “Frankenstein” and “Dracula.” The run of the show includes a number of matinee performances for thousands of area schoolchildren.

“I was hired by Marty Childers, the executive director of Jenny Wiley, to direct The Legend of Sleepy Hollow back in 2007. They weren’t totally happy with the script they already had, so I asked them for the opportunity to write a new adaptation,” Fisher said.

“I knew I could tailor the script more to Jenny Wiley’s needs and resources, and the demands of doing the show for students, and I wrote that first draft in about ten days. The show was a hit, and we’ve just been building on that tradition ever since.”

“Frankenstein” was our follow up, and we had a guy on stilts playing the Creature, so he was actually over 8 feet tall, which the kids loved. Last year, we did a more gothic superhero type version of Dracula, where the adaptation was faithful to the book, but the production of the show itself was more like a rock concert, with moving lights and some great fighting…it was like Dracula in the Matrix.” “This year is really special because it’s the first year we’ve done an entirely original story. Ghost Stories isn’t based on a famous book, it’s based on the urban legend about Bloody Mary. The idea came up because of the popularity right now of television shows like Ghost Hunters and movies like Paranormal Activity. There’s a real national phenomenon about anything paranormal right now, and we thought it would be the perfect time to do a haunted house type story. Anybody who enjoys those things or has an interest in the afterlife will really like the show. And, it’s just the right amount of scary for kids aged 10 and up.” “The play is about a girl named Elly who lost her parents in an accident a number of years back. She had an experience the night they died that made her believe in ghosts, so she put together her own ghost hunting team and went out to prove their existence. After three years she hasn’t had any luck, but on this night, in the home of Mary Worth (the inspiration for Bloody Mary) they finally make contact. The only question is whether or not they’ll make it out alive to tell the tale.” The show also features costumes designed by Helen Williams, set designed by Joseph Gourley and lights designed by David Gardner. For more information on the show, please use the contact information above. If you’d like to speak to Mickey Fisher, please call or email: 740‐550‐9124 www.jwtheatre.com