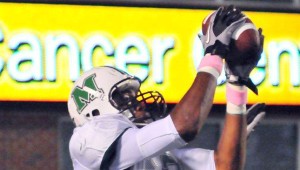 Marshall wide receiver Aaron Dobson leaps into the air and makes an acrobatic 12-yard touchdown catch against Central Florida on Wednesday night. Despite Dobson’s efforts on the play, the Thundering Herd lost 35-14 to Central Florida in a Conference USA game. (The Ironton Tribune / Kent Sanborn of Southern Ohio Sports Photos)

In a game played in the rain and stopped for 68 minutes due to lightning, the Central Florida Black Knights stunned the Marshall Thundering Herd 35-14 in a Conference USA game Wednesday.

“I thought our guys responded well to the distractions and the weather and handled it well,” said UCF head coach George O’Leary. “I thought we did a lot of things right on both sides of the ball. That was a tough win because Marshall plays really well up here.”

Weaver ran for a career-high 150 yards and the Black Knights rolled up 248 yards as a team to hand Marshall its third straight loss and second in Conference USA.

Other than a pair of touchdown catches by Aaron Dobson — he dropped a potential third TD pass — Marshall struggled on offense. The Herd (1-5, 0-2) went to the air 37 times due to a running game that managed a meager 37 yards.

“We didn’t run the ball well and we haven’t all year,” said first-year Herd head coach Doc Holliday. “I keep repeating myself. When we become one-dimensional, we struggle. We have to continue to work to find a way to run the ball.”

Herd quarterback Brian Anderson was 15-of-30 for 129 yards and a score. He also threw an interception.

UCF’s A.J. Bouye returned the interception 42 yards for a touchdown with 11:04 left in the third quarter and extended the Knights’ lead to 28-7.

Anderson was replaced on the next series and freshman quarterback Eddie Sullivan hooked up with Dobson on an 86-yard scoring play that cut the deficit to 28-14 just 22 seconds later.

Sullivan was just 2-of-7 for 97 yards. Dobson finished with five receptions for 119 yards.

Central Florida (4-2, 2-0) scored on its first possession by driving 79 yards in 12 plays with quarterback Rob Calabrese running 2 yards for the touchdown with 6:09 on the clock.

Calabrese injured his knee on the play and spent the rest of the game on the bench with an ice pack wrapped around his leg.

After a 62-yard Herd punt went into the end zone, the Black Knights went 80 yards in 11 plays with freshman quarterback Jeff Godfrey going 9 yards for the score and a 14-0 lead with 13:47 left in the half.

Godfrey — part of the two quarterback rotation the Knights use — was 11 of 21 through the air for 138 yards.

“I thought Jeff, still a freshman making some mistakes, makes big plays when he has the opportunity,” said O’Leary.

Marshall got within 14-7 on a 12-yard pass from Anderson to Dobson with 6:12 on the clock. The acrobatic catch by Dobson was under review for 12 minutes before the touchdown ruling was confirmed.

Dobson’s foot knocked over the pylon which is a violation, but the play was allowed because he was hit by UCF defensive back Justin Boddie with the ball while in the air.

But six seconds later lightning struck and the game was halted as the teams returned to their locker rooms.

When play resumed, UCF took control thanks to a 70-yard kickoff return by Jamar Newsome to the Herd 18 that set up a 5-yard scoring run by Godfrey.

About a minute later, Bouye came up with his interception return and the lead was 28-7 with 11:04 on the clock.

“It was kind of hard coming back,” said Dobson. “I think we did OK, but things didn’t go our way when we came back out.”

Central Florida used its running game to chew up time. The Black Knights sealed the win with a 59-yard, 10-play time-consuming drive that took 6:38 off the clock.

Since Marshall joined the conference, the two teams have met six times with the Black Knights winning every meeting.

Marshall plays at East Carolina on Oct. 23 and returns home Oct. 30 against UTEP in a pair of C-USA games.

The Associated Press CINCINNATI — Chad Ochocinco says he’s lost his confidence on the field. His plan for getting it... read more