Chamber honor those who serve county 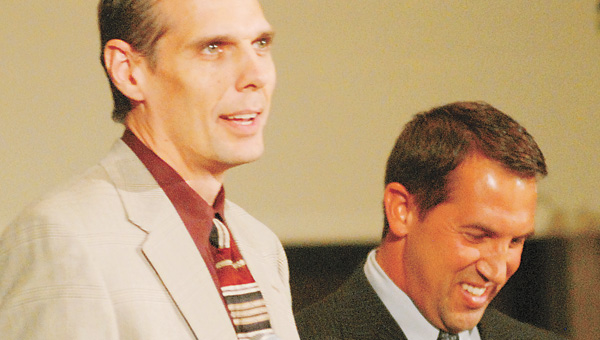 Paul Castle and Joe Isaac with Tri-State Rehab & Preferred Fitness, accept the award for Entrepreneur of the Year. THE TRIBUNE/JESSICA ST. JAMES

“If the business community doesn’t speak up for itself, it will get run over. That is what the chamber does.”

Doehrel was the keynote speaker encouraging those at the dinner to become involved in the election process this year citing an $8 billion deficit in the state budget, as well as the recently passed health care reform as reasons for concern.

“I cannot tell you how important this election cycle is,” Doehrel said. “We are truly in unprecedented waters. Ohio has more local chambers of commerce than any other state outside of California. We work together in a true federation for the business community.”

Doehrel’s remarks followed the chamber presenting a number of awards starting with the Business of the Year award going to Big G. Inc. “for its increased economic support to the community and beyond.”

In accepting the honor Clyse paid tribute to others.

“You have to be supported by good people,” said Clyse, who then paid tribute to his wife, Sissy.

“She has a heart as big as this room,” he said. “She has made me a better person.”

The Entrepreneur of the Year Award went to Tri-State Rehab and Preferred Fitness and Riverside Physical Therapy.

Public Servant of the Year went to the Lawrence County Solid Waste District.

“(The district) is out working with all the different groups. It is a contagious feeling of public service,” Ralph Kline, of the Ironton-Lawrence County CAO, said in giving the award.

Dan Palmer accepted the honor for the district.

“It’s your people that makes you. What makes you great is having a good team in place,” Palmer said. “It’s having a board that supports you and allows you to do your job. We are striving for the same goal, cleaning up the county.”

Casey Baker, an attorney with Huddleston Bolen, was given the Young Professional of the Year award.

“Encourage your young people to be involved in our community,” he told the audience.

Stephanie Burcham, outgoing chamber president, was honored for her leadership over the past year. Doug Korstanje of St. Mary’s Medical Center, was installed as president for the next year.

In a surprise Dianne Clement, former chamber president and member of the Lawrence Economic Development Corp., was honored for her lifetime of contributions to the county. Clement is retiring at the end of the year from Marathon Petroleum after 44 years.

Clement received a plague for her “tireless efforts for making Lawrence County a better place.”

The City of Ironton will not be putting a three-way flashing red light at the intersection of Seventh Street and... read more