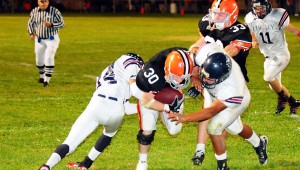 Ironton Fighting Tigers’ running back Tyler Hager (30) goes through a pair of Columbus Hartley defenders as he gains some of his 130 yards in Friday’s 37-16 win over the Hawks. (The Ironton Tribune / Tony Shotsky of Southern Ohio Sports Photos)

It was Ironton’s version of a Toughman Contest.

Faced with the fastest, most skilled team on their schedule, Ironton turned Friday’s game into a slugfest and easily came away the better brawler as the Fighting Tigers beat the Columbus Bishop Hartley Hawks 37-16 at Tanks Memorial Stadium.

“They have a lot of speed and big play capabilities,” said Ironton coach Bob Lutz. “We wanted to take it right at them. We whipped them at the line of scrimmage on both sides of the ball.”

Ironton and Hartley came into the game ranked 1-2, respectively, in Region 15 of the Division IV computer ratings. With the win, Ironton virtually locked up a playoff game and probably a first round home game.

But it wasn’t as easy as the final score might indicate. Lutz said the Hawks were a threat to go the distance each time they touched the ball.

“Key is the best back we’ve seen all year,” said Lutz. “We didn’t want to let him break out of the pack on us and we did a pretty good job of containing him and number five (Omar Lane).”

The Fighting Tigers’ offensive line was instrumental as they racked up 336 yards rushing. Brad Spoljaric, playing with a swollen knee, and Robbie Webb, who was sick during last week’s game and went to the hospital later in the evening, helped Ironton overpower the Hartley defense.

“The first half we tried to feel them out and we ran right at them,” said Webb. “In the second half, we figured out their schemes and everything started working. The offensive line did an awesome job and the defensive line did their job.”

Tyler Hager ran 13 times for a career-high 130 yards and scored two touchdowns while Brian Warner had 98 yards and a score as Ironton (6-2) snapped a two-game losing streak.

“We have three or four backs who are capable of having a big game.”

Hartley (6-2) was led by All-Ohio running back Noah Key with 111 yards on 20 carries and a TD. Austin Underwood was 4 of 10 passing for 66 yards and two interceptions.

Brandon Leach and Tyler Kratzenberg had the picks for Ironton.

Ironton’s defense forced a punt on the first series of the game, then went 50 yards in 12 plays capped by Tres Wilks’ 5-yard run. Tommy Waginger ran for the conversion and it was 8-0 at the 4:49 mark.

Hartley used its no-huddle offense to go 69 yards in nine plays and Key ran the final 8 yards for the score. Key also added the conversion run to tie the game.

A holding call on the kickoff return pushed Ironton back to the 11-yard line and the drive stalled. But Key fumbled the punt and Ironton recovered at the Hartley 32.

Three plays later Warner ripped through the left side for 11 yards and the touchdown. Hager added the conversion and it was 16-8.

Hartley went three-and-out as Ironton got the ball at its own 20. With the biggest gain 11 yards, Ironton used 13 plays to score as Waginger did the honors from 2 yards out. Jonathan Williams kicked the conversion and it was 23-8 just before the half.

The Hawks tried an onside kickoff and Ironton covered the ball at the 40. Six plays later Hager bolted 35 yards and Waginger’s conversion run made it 31-8 with 9:30 left in the third quarter.

After an exchange of possessions, Hartley went on a 97-yard scoring drive highlighted by a 52-yard pass from Underwood to Lane and a pass interference on a third-and-goal at the 23.

Key got one yard on third down at the 11, but Underwood threw a scoring strike to Lane on the next play. Hartley then used a shovel pass to Jarrod Zang out of the kick formation and it was 31-16 with 9:04 to play.

But Kratzenberg came up with an interception at the Ironton 39 with 5:47 left and then Ironton chewed up all but 1:14 by going 61 yards in seven plays with Hager running the final 10 yards to seal the win.

The Associated Press MADISON, Wis.— Ohio State is one and done as No. 1, after Wisconsin bullied the Buckeyes all... read more