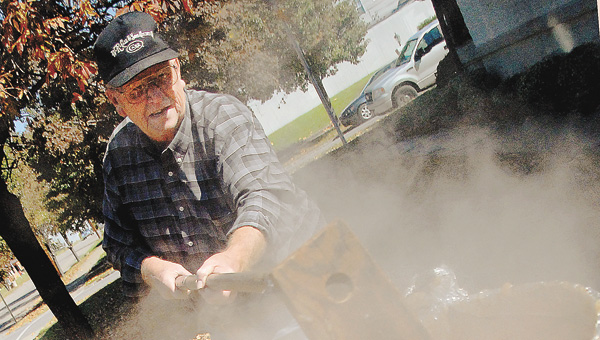 It wasn’t even light yet and the temperature a crisp chilly 39 degrees Saturday morning with Pat Arrington put on the kettle for the day.

That’s apple butter kettle and Arrington was starting the fire outside the Lawrence County Historical Society Museum for the annual fall fundraising — making the autumn treat.

Soon inside museum volunteers were heating up the first pots of apples on the stove in the museum kitchen.

Earlier in the month volunteers showed up at Arrington’s house to peel eight bushels of Rome Beauty apples.

“We picked that because it is an Ohio apple,” Arrington said.

For four days volunteers peeled, cored and sliced, then boxed them up and took them to Pick ‘n Save who keep the prized ingredient in their freezers.

“They are very cooperative,” Fondalene Alfrey said as she heating up a Dutch oven of the sliced apples. “We heat them up so they don’t cool down the pot.”

Every so often Peggy Karshner would carry out more apples to the massive cast iron kettle out in the side yard where volunteers traded off duties of stirring and stirring with a three-foot wooden paddle.

By 3 p.m. the cooking stopped and filling the quart and pint jars began.

The museum had been taking orders for the past month, but will also sell the butter at its headquarters as long as they are jars left.

There will be two recipes sold: sweetened and unsweetened with quarts for $7, pints at $4 and half pints at $3.

Before noon Alfrey was stopped by a car outside the museum wanting to know how long was the wait.