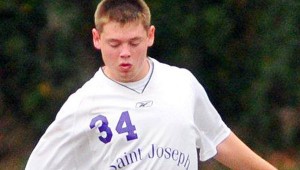 Second verse, same as the verse.

After a regular season-ending 7-1 win last Thursday at Portsmouth West, the St. Joseph Flyers came back home with a 5-1 soccer win over the Senators on Monday in the first round of the Division III sectional tournament.

“We played reasonably well and showed positive hustle from every player on the team,” said Flyers’ coach Dan Blair.

With the win the Flyers (8-5-1) will now play at Portsmouth Clay at 5 p.m. on Wednesday. The winner will advance to the district semifinals next Monday.

Admission is $5 as set by the Ohio High School Athletic Association. No passes will be accepted.

Coal Grove Hornets’ senior running back Boo Woods (2) is brought down by a River Valley player but not before... read more