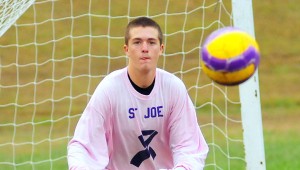 PORTSMOUTH — To say the St. Joseph Flyers were determined was an understatement.

The Flyers’ mission Wednesday was to win the Division III sectional soccer championship and they did so with a 6-2 win over the Portsmouth Clay Panthers.

The Flyers won in a game that saw each team get a red card when a scuffle broke out near the sidelines.

“To say the least, it was a very intense and physical game,” said Flyers’ coach Dan Blair. “Both teams refused to back down.”

The Flyers Tanner Riley had the best game of his career offensively as he scored four goals. Also scoring goals were Payton Blair and Levi Hopkins while Tanner Carte and Blair each registered an assist.

In a September game between the Flyers and Pirates, Wheelersburg won 4-0 as they got off to a fast start and scored all their goals early in the first half.

SAN FRANCISCO (AP) — Juan Uribe hit a game-ending sacrifice fly off reliever Roy Oswalt with one out in the... read more