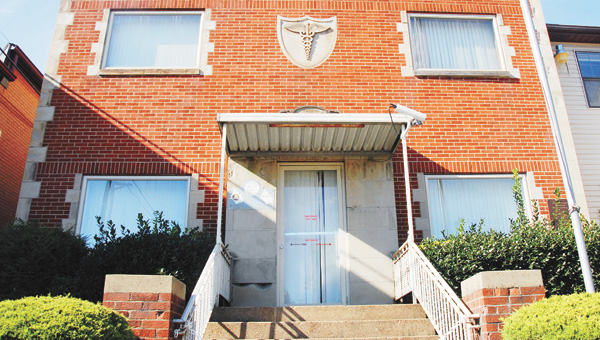 The Lawrence County 911 Board has been given the task to to come up with a proposal to combine the Ironton, Lawrence County Sheriff’s Office and 911 dispatching into 911 center located on Park Avenue in downtown Ironton. THE TRIBUNE/JESSICA ST. JAMES

It would mean a personnel budget of just under $700,000 to merge the current 911 dispatching system into a centrally located and integrated operation. And all that would be coming out of the county’s pocket.

Yet that would be a savings if you add up the budgets of the individual agencies providing the service right now.

Those are the findings of the ad hoc Lawrence County 911 Board that presented its proposal to the county commissioners at their regularly scheduled meeting Thursday.

About a year ago the advisory committee was established to look into having a single dispatch center for all emergency calls, whether city police, fire, sheriff’s office or ambulance service. Currently three separate agencies provide those services: Ironton Police, the Lawrence County Sheriff’s Office and 911.

Right now 911 alone has a personnel budget of $345,600 to cover salary and benefit costs for five full-time and nine part-time dispatchers.

In the proposal there would be nine full-time dispatchers — three dispatchers for each of three shifts, plus a fourth peak dispatcher working from 2 p.m. to midnight, a supervisor and 10 to 15 part timers.

On top of those costs would be modifications to the current 911 dispatching center to accommodate additional personnel, plus equipment costs.

“When the committee looked at this, we did not take it on a no-cost comparison,” Ironton Fire Chief Tom Runyon told the commission. “What we looked at was what will make it most efficient and better for the people we serve.”

And even though the three entities would combine the commissioners were told there would be no lay offs.

“Should this take place, there would be no jobs lost,” Ironton Police Chief Jim Carey said.

The commission will now review the proposal to determine what action it will take.

In other business the commission:

• Received the weekly dog warden report where 39 dogs were destroyed and 11 sold. Currently there are 82 dogs in custody.

• Heard a request from Chesapeake Mayor Dick Gilpin for help in getting matching funds for repair work on North Huntington Heights. The village has a $415,000 grant that requires the village to come up with 10 per cent matching.

• Approved out of county travel request for Sheriff Jeff Lawless to attend a meeting in Columbus.

• Received the resignation of Anna Bellomy as a vehicle operator for the Department of Job and Family Services.

• Approved the recalling of Benny Taylor as an aide at the Department of Job and Family Services.

Pending a further investigation, charges have been dropped for two Lawrence County residents who were accused of kidnapping, Cabell County... read more