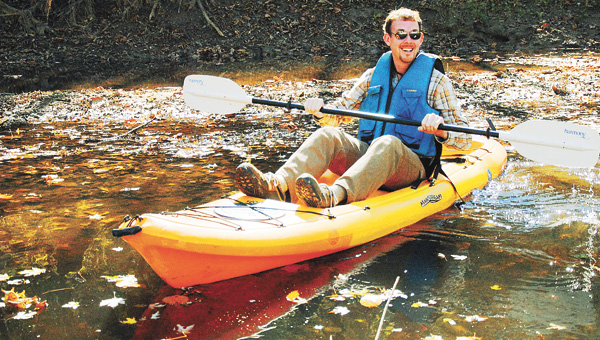 Adam Wilson, with Ohio University Southern, participates in a symbolic launch of the first kayak at the Arabia Canoe Launch Friday in Arabia. THE TRIBUNE/JESSICA ST. JAMES

Several who remembered and loved Art Ferguson came to witness the realization of one of his dreams.

The Arabia Canoe Launch — the trailhead of a canoe trail named in Ferguson’s honor- was dedicated Friday afternoon.

“It would have meant the world to him,” said Melissa Flint, Ferguson’s youngest daughter who traveled from Nashville, Tenn., for the occasion. “He was dedicated to it for years. I wish he could have seen it.”

Arthur Ferguson was the founder and promoter of the Symmes Creek Restoration Committee, serving for 28 years until his death in 2005. Ferguson’s vision for the creek included canoe launch sites from Arabia to Chesapeake. Besides the Arabia launch site, there are five others on the Arthur S. Ferguson Jr. Canoe Trail: Aid, Willow Wood, Getaway, Sky Lake and Chesapeake.

Besides Flint, several members of the Ferguson family came to see the ceremony from South Point, Cincinnati, Montana and Wisconsin. Several other officials from the Lawrence County Commission, the WNF’s Ironton Ranger District and the Lawrence Economic Development Corporation were also at the ceremony.

Ferguson’s grandson, Shawn McComas, addressed the attendees about his grandfather, who was an avid outdoorsman.

McComas recalled a time when he was a young boy and his grandfather caught him and some friends shooting each other with BB guns. Instead of lecturing him or getting angry, the man made a makeshift bow and arrow out of tree bark and joined in the battle.

“You can think of Art as a mild-mannered, suit-wearing grandfather that you want him to be. He’s Indiana Jones to me,” McComas said.

The Arabia launch site is the last of a 6-year to-do list for the committee, chairman Grayson Thornton said.

“Neither the trail nor the committee would be here without Art,” Thornton said.

The $162,000 launch site was funded by the Ohio Department of Natural Resources Division of Watercraft, representatives of which were on hand for the ceremony. The money used for the site came from the watercraft registrations and a percentage of the state gasoline tax, as well as some federal funds.

Boating is a big part of tourism in Ohio, said Pam Dillon, chief of the Division of Watercraft. In the past six years canoe and kayak registration has doubled to 20 percent of boat registrations, she said.

Dean Palmer, of the Division of Watercraft, remembered Ferguson as an outdoorsman and said he would be happy about the launch site.

“Every time you canoe down this creek, you’ll have to think of him,” Palmer said.

COSI rolls in for another year

Volunteer Schylar Fields shows 11-year-old Austin Hay how to complete a circuit during a visit from COSI at Ironton Elementary... read more