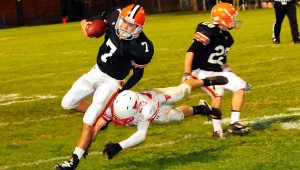 The Ironton Fighting Tigers are like a migraine headache. They just keep pounding and pounding away at you.

Despite a lackluster first half, Ironton continued with its punishing ground game and pounded out a 29-19 win over the Fairbanks Panthers Friday on Senior Night.

“We scored pretty easy on our first drive and I think we thought it was going to be easy. But (Fairbanks) was a scrappy bunch and kept battling,” said Ironton coach Bob Lutz.

“We played with a little more intensity in the second half and just kept running the ball right at them. We probably should have punched in one more.”

Ironton’s starting backfield accounted for 60 of the team’s 62 carries and 367 of their 370 rushing yards.

Quarterback Tommy Waginger ran 12 times for a career-high 104 yards and a touchdown. Tres Wilks had 98 yards on 15 carries, Tyler Hager had 87 yards on 15 attempts and fullback Brian Warner 78 yards on 18 tries.

“All our backs ran hard. They weren’t trying to sidestep anyone. They were trying to run over people,” said Lutz.

After holding the Panthers on downs at the Ironton 25 to start the game, the Fighting Tigers went 75 yards in 13 plays as Warner ran 1-yard for the touchdown with 4:27 left in the quarter. Waginger ran for the conversion.

Fairbanks answered with its own 13-play drive covering 59 yards capped by an 8-yard scoring pass from Nick Gibson to Mitch Rausch. The conversion run failed.

The Fighting Tigers then took the ensuing kickoff and marched 54 yards in nine plays with Warner going the final yard again to end the drive. Hager ran for the conversion and a 16-6 lead.

But three plays later Gibson heaved a pass down the middle of the field to Jarod Raplogle for a 65-yard scoring play and it was 16-12 with 5:08 left in the half.

Fairbanks recovered an onside kickoff to start the second half, but Ironton’s defense forced a punt and then went on a 74-yard, nine-play drive that culminated with a 22-yard keeper by Waginger and it was 22-12.

Tyler Kratzenberg came up with an interception of Gibson at the Ironton 24 and it took the Fighting Tigers eight plays to go the distance. Hager had a 5-yard scoring run and Jonathan Williams’ conversion kick extended the lead to 29-12 just before the end of the quarter.

“Conditioning was big,” said Wilks. “They had more intensity to start the game. We were flat. All we heard during the week (from fans) was that we were supposed to win. We wore them down in the second half. We just pounded the ball at them.”

Fairbanks (7-2) relied on its short passing game as Gibson was 14 of 23 passing for 208 yards and two touchdowns. He also ran for a score.

But the Panthers had just one net yard rushing in the second half on 12 attempts. Gibson was 7 of 15 passing for 107 yards in the half with 54 yards coming on a middle screen.

“You take away the one screen pass and they didn’t get a whole lot of yardage in the second half,” said Lutz.

Ironton had a drive stall at the Panthers’ 38 and three plays later Gibson and Burnside combined on a 54-yard gain off a middle screen to the 6-yard line. Two plays later Gibson scored from 2 yards out and it was 29-19 with 7:28 to play.

Ironton went on a 13-play drive from its own 20 to the Fairbanks’ 20 before stalling with seven seconds to play.

Ironton clinched a home playoff game with the win and can secure first place in Region 15 of Division IV with a win at Portsmouth next Friday.