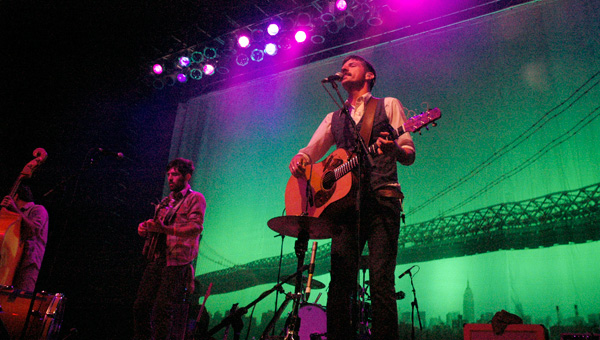 HUNTINGTON, W.Va. — The Avett Brothers said they felt right at home back in the South, on Saturday night, performing at the Big Sandy Superstore Arena in Huntington, and at one point, Seth Avett declared, “There are so many fine people in West Virginia!”

The alt-bluegrass group, known for their honest and emotional lyrics, fronted by brothers Scott and Seth Avett played unrelentingly for nearly two hours, never lesing the intensity that draws their fans to see them time after time.

With Scott on banjo and harmonica, Seth on acoustic guitar and Bob Crawford on upright bass, the group opened their hybrid bluegrass-punk-folk-rock show with “Backwards With Time” from their 2004 EP “The Gleam.”

They continued on with several tracks from their most recent studio album, “I and Love and You” (2009), which was their first big-label release.

Less rowdy, but just as intense, the band also performed from that album “January Wedding,” “Head full of Doubt/Road Full of Promise” and the title track “I and Love and You” against a backdrop of the Brooklyn Bridge.

The Avett Brothers also played a new song that has yet to be recorded, “Skin and Bones.”

Long-time fans of the group appreciated a full range of the group’s musical library. From the subdued, sweet melodies of “Sanguine” and “Bella Donna” to the raw, screaming and foot-stomping “Colorshow” and “Talk on Indolence.”

The Avett’s truly made it a family affair when they brought out their sister, Bonnie, to sing on the sentimental version of “Swept Away” and to play piano on “Go to Sleep.”

With a band like the Avett Brothers, that gets virtually no radio play, it is inspiring to some to hear the thousands in the crowd sing along to every song, no matter which album it comes from.

“This concert was better because they played more of their older music,” said Shana Lambert. The Huntington, W.Va. native said she had seen The Avett Brothers three or four times already.

“Very talented,” she said of the group.

Tyler Sturgeon, also from Huntington said, “I see them every time.”

Sturgeon said he has seen the Avetts six times, including their show at the Keith Albee Theater last October.

He said of Saturday’s show, “It was really good, probably better than the last time I saw them. I love them. They put on a real good show.”

Over the past 10 years, the group, out of Concord, N.C., has developed a following that has spread from their hometown, to across the country. Since their formation in 2001, the band has played festivals across the U.S. including Bonnaroo in Tennessee, Merlefest in North Carolina, Coachella in California, Hullabalou in Kentucky and even Appalachian Uprising in Scottown.

Many of their shows sell out, including this week’s two-night event at the Ryman Auditorium in Nashville, Tenn.

Devoted fans Sarah Arthur, Amelia Johnson and Lauren Thornberry, or “Team Avett,” from Lexington, Ky., celebrated their 25th Avett Brothers concert on Saturday. They have no plans to stop, as they will also be attending the show at the Ryman Auditorium.

Johnson said a friend who sent her a song to listen to introduced her to the band.

She then passed it along to Arthur and Thornberry.

“Then we went to see them once and we were hooked,” Johnson said.

As to why they keep returning time and again, Johnson said, “It’s different every time. And they’re really nice guys.”

All three agreed on their favorite song of the night, “Sanguine.”

“We’ve never heard it (live) before, they don’t play it a lot,” said Arthur.

Before the band left the stage (and returned for an encore), Seth thanked the crowd saying, “Thanks for being so sweet to us.”

And they did return for an encore as Seth replied, “I know we’ve got a couple more songs in us,” as the crowd roared.

They closed out the night with “Living of Love,” Pretty Girl from Cedar Lane” and an emotional and heartfelt “November Blue,” to which the crowd sang so loud, they almost covered up the band.

They left the stage a final time, Seth saying, “We’ll be back here as soon as we can. I wish we didn’t have to leave.”