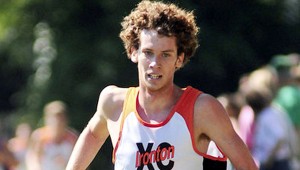 RIO GRANDE — The district cross country road ran through the hillside at the University of Rio Grande.

On Saturday it also ran through the Ironton Fighting Tigers and Fairland Dragons.

Not only did Ironton come away with two team trophies, but seniors Gary Monroe and Taylor Hacker claimed first place overall in the individual championship.

Ironton claimed the first, second, fifth, sixth and seventh spots to total a mere 18 points. Ironton had a team time total of 1:29.21.

Fairland’s girls had 88 points as a team with Ironton second with 124 points. Hacker took the individual title as she easily outdistanced the field with a 20:48.40 clocking.

“We’ve had good individuals and some good teams qualify for regionals, but to have a team champion and team runner-up and a boy and girl champion, it’s hard to beat a day like that.”

The top four teams in Div. III qualify for the regional meet this Saturday at Pickerington North High School. The top 16 runners not on a qualifying team also advance.

“We have kids who have bought in and they were willing to do the work,” said Thomas. “We’ve had to share kids with volleyball, tennis, band and cheerleading, and they’ve still been good about getting their work done.”

“The girls trained hard the entire season and earned the championship,” said Fairland coach Chuck Wentz whose team was without Mariah Chaffin, one of their top five overall runners. Chaffin sprained an ankle Friday night.

“The girls stepped up with one of their team members down and won the race.”

Qualifying in the girls’ meet besides Fairland and Ironton were North Adams and Westfall.

Fairland’s boys tied with Sheridan for second place behind cross country power Unioto with 47 points. Fairland and Sheridan had 110 points while fourth place Circleville finished with 164 points as they advance to the regional meet in Troy.

“The boys did not have their best race, but they were still able to achieve the goal of placing at the districts and moving on to the regionals,” said Wentz. “They have had a great season and want to continue running as long as they can.”

Vikings bounce back with 34-0 win over Titans