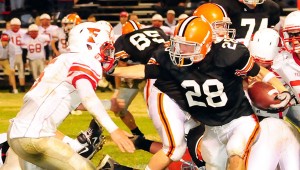 This is some kind of ending to the story.

The story is the regular football season. The ending has the Ironton Fighting Tigers visiting the Portsmouth Trojans in one of Ohio’s longest running rivalries.

Ironton comes into the game 7-2 and looking at clinching first place in the Division IV Region 15 postseason playoffs. Portsmouth is 3-6 but the Trojans have their sights set on playing spoiler to Ironton’s plans.

“They’ll give us their best shot. They always do,” said Ironton coach Bob Lutz. “They’ve struggled at times this year, but a lot of that has had to do with injuries. We know what that’s like to a lesser extent. But they’ve got their people in place and they’ve play almost an entire season.”

One factor that shouldn’t be overlooked is the game will be played at Portsmouth’s new field. It will be Ironton’s first trip into the stadium to play on the artificial surface.

“They’re like any other team. They like to play at home and usually teams play better in familiar territory,” said Lutz.

The Trojans lost starting quarterback Josh Myers in week four after losing to Wheelersburg 34-28 in the final 17 seconds of the game. The Trojans had the ball inside the 10-yard line three times and did not score against the Pirates because of penalties.

“They’ve had several games that could have gone the other way. They could easily be 6-3 instead of the other way around,” said Lutz.

Defensively the Trojans are a 4-4 alignment but have usually mixed up their defenses against Ironton to include a 6-3 and a 5-3 package.

“They’re a typical Portsmouth team on defense. They’re aggressive, they play hard and fly to the football,” said Lutz.

The linebacking corps is led by senior Tre Underwood (6-4, 205) who is one of six returning starters to the unit. Gulley is the other inside linebacker with Royster and Porter on the outside.

As usual, everyone knows what they have to do going into the final week of the regular season. Now, if... read more