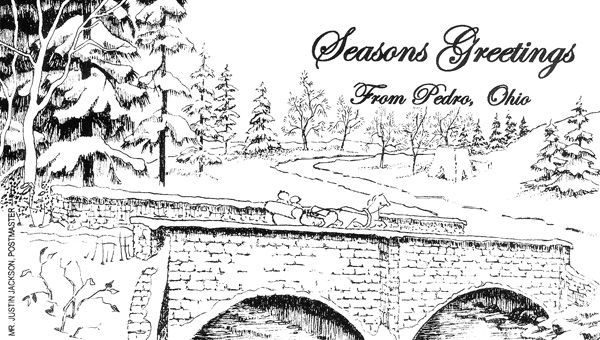 PEDRO — The Lake Vesuvius stone bridge may have fallen victim to the July floods, but a Christmas postcard that’s available can be a way to keep the image of the landmark in memory.

Once again the Pedro post office is offering the cards featuring a black and white period sketch for the holiday season.

“When they used to have the Vesuvius festivals, we did post cards with the different furnaces,” Justin Jackson, Pedro postmaster, said. “People said it would be kind of nice for something for Christmas.”

Jackson got a family friend, Bill Fraley, a retired art teacher from the Westerville School District, to do the sketch and began selling it last season.

The postmaster thinks the postcard has especial significance today as engineers consider the design of the permanent structure that will replace the old bridge that was washed out during the heavy summer rains.

Design work is expected to begin this winter, according to Lawrence County Engineer David Lynd.

What the structure will look like is still unknown, although options have been considered including have only one large tunnel or arch instead of the two that were part of the original bridge.

In a few weeks the temporary bridge downstream will be open and take care of the traffic flow until the permanent one is completed.

The temporary is an all-steel twin span structure that is 70-feet-long. It is expected to be used for about a year.

Both bridge projects have a total $1.25 million price tag and are funded through the Federal Highway Administration with the money coming through the forest services.

The bridge postcards are available through the Pedro post office and cost 50 cents each.

‘Hollow me out, Lord’ celebrates God in all things

It’s a liturgy whose goal is to show God’s hand in all things. That’s part of the message of the... read more