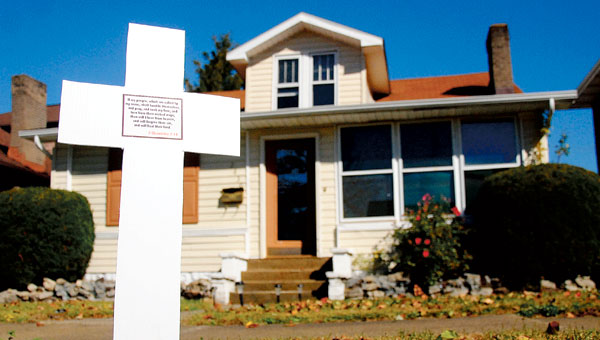 Dan Hieronimus is making a statement about faith with white crosses across the community. THE TRIBUNE/JESSICA ST JAMES

One Ironton resident is sending a message that people shouldn’t be afraid to share their faith with one another.

Dan Hieronimus, former sheriff and former director of the STAR Community Justice Center in Franklin Furnace, has begun the process to make what he called a small but powerful statement about the state of Christian values in the U.S.

“I read an email about this atheist that complained in his town that on a bridge there were two crosses and complained that they shouldn’t be there,” Hieronimus said.

Hieronimus continued saying that the town complied and removed the crosses. He also said that the ashiest wanted the city seal changed because it had crosses on it.

“The citizens got upset about it so they started putting white crosses in their yards to send a message that we’re Christians and we’re not ashamed of it and we are or were a Christian nation,” Hieronimus said. “When I read that I thought, you know, that would be a good project.”

Three weeks ago, Hieronimus began to follow the example of the city in his email and started making two-foot tall white crosses to be placed in yards.

“I made a few and my friends all said, ‘Yeah I’d like to have one of those.’ I went and bought a bunch of material to start making them,” he said.

Each cross also has a Bible verse from 2 Chronicles 7:14 that reads, “If my people, which are called by my name, shall humble themselves and pray and seek my face, and turn from their wicked ways, then will I hear from heaven and will forgive their sin and will heal their land.”

Hieronimus said that he didn’t know if the e-mail story was true, but that either way, the message was still important.

“Whether it happened there or not, I’d like for it to happen here,” he said.

And it has been happening, according to him. He has been going door-to-door around Ironton, asking if people want to participate in the message. He said he has sold about 200 crosses so far.

“For most people, there seems to been a genuine interest in it,” he said. “I sold 50 to a church in Franklin Furnace, 10 hear and 15 there. I sent some to Columbus, Ohio, and Lexington, Ky.”

He said he even had a visitor from Wyoming take two crosses with him when he left.

And he is ready to make more, he said. He recently bought materials to make 500 more.

Hieronimus is selling the crosses for $5 each or less.

“I tell people they are $5 or less. If you can’t afford $5, whatever you can afford,” he said. “I’m not looking at making money off the project but I would like to get crosses in everybody’s yard or as many yards a possible.”

He said the money covers the cost of supplies to make the crosses. He also said that 20 percent of the money collected would go towards the Faith and Fitness Center at First Baptist Church of Ironton.

Hieronimus said he thinks that the crosses will help other people feel confident to share their faith.

An Ironton man will serve 90 days in jail and four years of community-controlled sanctions for domestic violence and resisting... read more