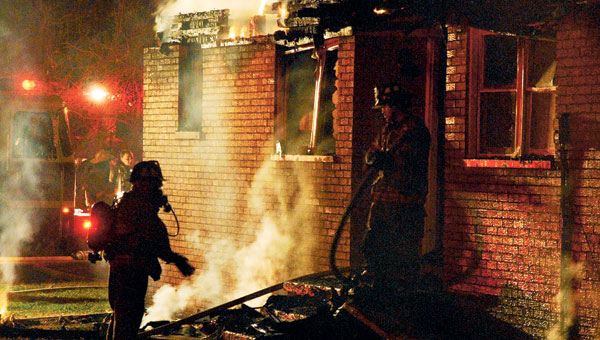 Investigators from the Ohio Division of State Fire Marshal have determined Friday morning’s fire in Chesapeake was arson.

Investigators were able to rule out accidental causes and found evidence indicating the fire was intentionally set in apartment number 1, said Shane Cartmill, public information officer for the state fire marshal. Because the investigation is ongoing, the specific details of the cause of the fire have not been released.

The fire was contained to the duplex and both apartments sustained severe fire damage.

No one was home at the time of the fire. Nine people lived in one apartment and one person lived in the other, Cartmill said.

Smoke alarms were found at the complex, but they did not function.

Ed Webb, assistant chief of the Chesapeake Fire Department, said the apartment complex was fully engulfed and flames were shooting out of the roof at the time the department arrived.

About 20 firefighters from Chesapeake, Burlington-Fayette, South Point and Rome responded to the fire. Firefighters had to shuttle in water from the nearest hydrant, which was ¾ mile away, Webb said. The apartment complex did not have electric, Webb said.

A Blue Ribbon Arson Reward of up to $5,000 is being offered to anyone with information about the identity of the person who set the fire. Anyone who saw something out of the ordinary at or around the time of the fire or anyone who has heard someone talking about the fire with an unusual interest or knowledge should call the Division of State Fire Marshal at 1-800-589-2728.

Name, cause of fatal fire released

Fire caused by portable heater A fire that killed one person in South Point early Thursday morning was caused by... read more