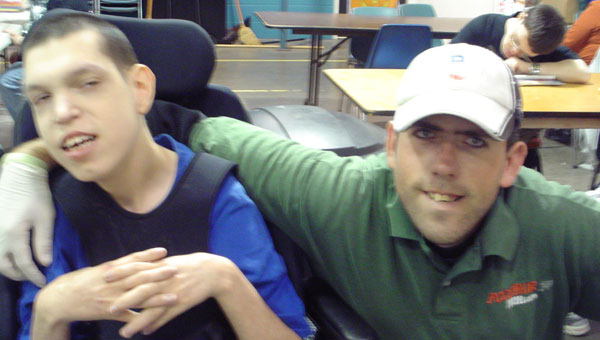 COAL GROVE — October is National Developmental Disabilities Employment month, and Tri-State Industries has the best of the business.

For over two years, Bill Sowards, 28, has been employed at Tri State Industries, the non-profit corporation located in Coal Grove which serves as employment for individuals with developmental disabilities.

Sowards, who lives in Chesapeake, not only enjoys working at the facility, but he can’t get enough of staying busy. Sowards’ title is a material handler at TSI, which consists of shrink wrapping containers, stacking products, and sorting materials used in the shop. Sowards, however, won’t let his assigned duties be the extent of what he does.

“I’m always getting hollered to do something, because everyone knows I’m willing to work and do just about anything to help out,” says Sowards. “I’m always looking for stuff to do, even when I slow down. I can’t stand for the workshop to be dirty so I’m always cleaning up around – wiping windows, scrubbing doors – you name it!”

Becky Lester, Sowards’ supervisor at TSI can vouch for Sowards that his hard work is a fine description of how Sowards contributes to the workshop. “He’s a good worker, and joy to work with,” says Lester. “I’ve never had to ask him twice to do anything, and that carries over to what kind of person he is, because he’s a good guy.”

Lester’s comments would come as no surprise to Sowards, as he acknowledges that there is a special relationship with his supervisor,

“She’s really proud of how far I’ve come,” Sowards admits. “I’ve had some rough times, but Becky has stuck with me through thick and thin, and always showed me that I can get through things and really be good at what I do.”

Sowards, like others employed at TSI, also has found employment in the surrounding community. Sowards works the carry-out at a local grocery store in South Point. Sowards enjoys staying busy, and his carry-out position allows him to continue to display his work ethic.

Jason Kinder, Community Employment Specialist and the Lawrence County Board of DD, keeps in contact with Sowards’ employers. “I talk to them often and they can’t say enough,” says Kinder. “I can’t imagine someone being in a better situation than he is right now. He’s really found a great situation and made the best of it.”

Josh Tackett, Workshop Director at TSI, says that the community employment for Sowards helps to show the surrounding employers that hard workers can be found within the DD community. “We’re wanting to include open tours of our facilities to show employers in the community that this can be a great place to recruit a reliable workforce for some of their tasks and duties,” says Tackett. “A lot of these people are hard, hard workers – and Sowards is a great example of that.”

Despite working his fingers to the bone throughout the days of the week, Sowards likes to enjoy his time off like anyone else. His favorite recreational activities are going on bike rides and watching action movies. But staying busy and helping others where help is needed remains Sowards’ favorite passion at this time.

Tri-State Industries, Inc., is a private, non-profit corporation in conjunction with the Lawrence County Board of DD, which serves more than 500 children and adults with developmental disabilities from throughout the county.

For more information about the LCBDD and Tri-State Industries, or to tour the facilities, call (740) 532-1234.

What a wonderful day, Saturday, Oct. 23, we had with the 2010 excursion on the New River Train that was... read more