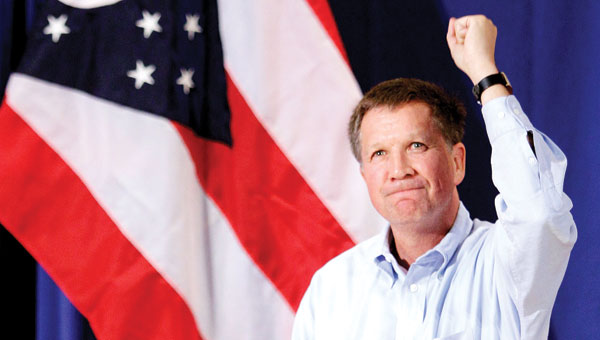 The 58-year-old Kasich beat Strickland with attacks over the loss of 400,000 jobs. The Democratic governor pointed to national economic factors and declining unemployment — without success.

The fight hurt both Strickland and his lieutenant governor, Lee Fisher, who led the administration’s early job creation efforts. Fisher lost his bid for U.S. Senate on Tuesday, joining all Democrats who held statewide offices.

In a concession speech for Democrats statewide who lost Tuesday, Strickland vowed to continue working on behalf of Ohioans: “I’m going to fight for this state as long as there is breath in my body.”

With 98 percent of precincts reporting, Kasich had a little more than 49 percent of the vote to just under 47 percent for Strickland. Provisional ballots cast by those whose votes were questioned due to lacking IDs or having changed addresses were still outstanding.

Kasich fought Strickland’s attacks on his record as a managing director at Lehman Brothers, the failed investment bank, with promises to bring a more business-minded approach to the state’s economy.

Kasich’s victory was fueled by support among voters in dozens of rural and suburban counties where the two men campaigned hard in the final weeks of the closely watched race. Strickland, also a former congressman, clinched victories in a swath of counties in the southeastern Ohio foothills, including his home county of Scioto.

Both Strickland and Kasich told voters over a year of campaigning that their approach could best fix the state’s ailing economy. The once-proud manufacturing state has lost some 400,000 jobs since 2007, and unemployment stands at 10 percent. A projected state budget gap of as much as $8 billion looms.

But Kasich ultimately prevailed with his message of smaller government, tax cuts, and reduced business regulations.

Kasich will sit on the powerful apportionment board, which draws state legislative districts that will hold for the next 10 years. He will also get a sign-off on congressional districts to be drawn by a Legislature that Tuesday’s elections handed to Republicans.

Ohio was viewed as a state the GOP had to win if it wanted a shot at ousting President Barack Obama from the White House in two years, as well as a state Obama needed to clinch as his support erodes more deeply in other parts of the country.

Kasich tied the once-popular Strickland to the Obama administration, criticizing him for supporting government expension and tax hikes. Strickland said he only delayed an income tax reduction for two years in a horrible recession — but the tax hike label hurt.

According to preliminary exit poll results by The Associated Press, worries about the economy ultimately sank Strickland.

Kasich won big among those who think the country is going in the wrong direction and are worried about what will happen with the nation’s economy in the next year.

Independent voters, along with those 65 or older — groups that backed Strickland four years ago — threw their support to Kasich, too, according to the preliminary results.

Kasich proposed plans to shrink Ohio government by shuttering the Ohio Department of Development and replacing it with a panel of business executives and said he wants to phase out the state income tax. He said he would dismantle Strickland’s education-funding system if elected, saying it is unfunded.

He received backing from the National Federation of Independent Business-Ohio and an historic endorsement from the Ohio Chamber of Commerce.

Strickland and Kasich had raised a record $31.4 million combined, as of the last accounting before the election. Spending was also on pace to break a record for past governor’s races.

It was a neck-in-neck horse race as current County Commissioner Doug Malone fought to keep his seat against his challenger,... read more