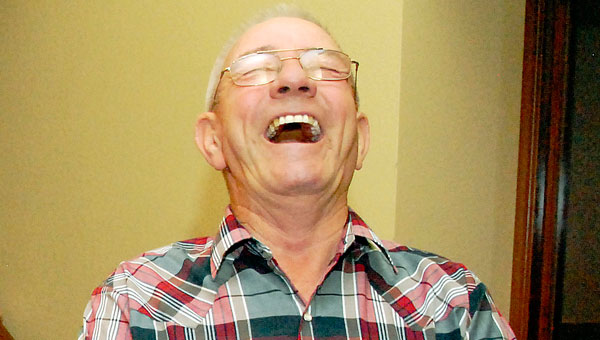 It was a neck-in-neck horse race as current County Commissioner Doug Malone fought to keep his seat against his challenger, Republican Paul Herrell.The first 25 precincts and all absentee ballots showed Malone with almost 55 percent of the vote. With 55 precincts counted, Malone’s lead started to slip down to 51.06.

Watching it all from the stairs of the courthouse was Linda Herrell, the candidate’s wife. Just before the final tally was released elections board member Freddie Hayes gave her the thumbs up.

With a shriek and a cry of “you won,” she broke the news to the crowd.

It was the second time the pair had faced off. Eight years ago Herrell was the sitting commissioner who lost to the then newcomer Malone.

This time it was Malone who ran on his record of fostering a strong economic climate for businesses, citing the expansions of McGinnis Inc. and Liebert as well as the proposed St. Mary’s Medical Center facility on State Route 141.

Malone pointed to the Republican sweep as the main reason for his defeat.

“It wasn’t totally unexpected. I knew there would be a Republican vote,” he said. “I congratulate Paul on his victory and hope everything goes well for the county. Everybody has been very good to me. I have had 23 straight years where I have been able to work with the people. I just chart a different part of my life.

“Politics is timing. Four years ago I won by a landslide. Eight years before that I won pretty well. It was a good time for Democrats. This is a good time for Republicans. Paul ran a good campaign. We both kept it clean.”

Herrell’s platform was to bring jobs to the county and extend water and sewer service to those without. He also hopes to have a full-time grant writer for the county.

“It’s been a hard run,” Herrell said. “We hope we can do something for the county. I’m just tickled to death. We are trying to get the county back on its feet.”

Job remains in Republican fold It was only 9 p.m. Tuesday when the text messages into Jason Stephens’ cell phone... read more