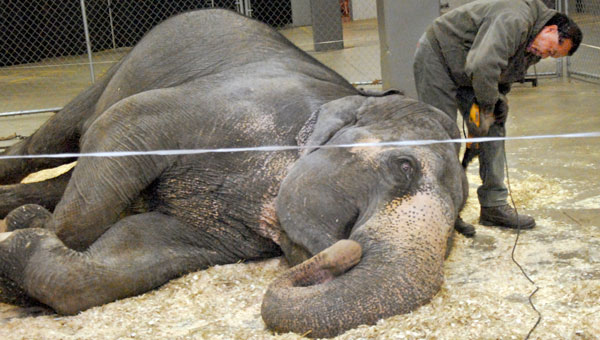 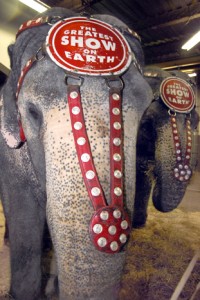 HUNTINGTON, W.Va. — They were just two middle-aged broads munching away at their lunch. But in less than 36 hours, Minnie, Susie and Bonnie would turn into full-fledged extravaganza stars of the upcoming Ringling Brothers, Barnum and Bailey Illuscination. All 25,500 pounds of them.

In their mid-40s these Asian elephants are just halfway through their life expectancy in captivity and have been circus troupers for decades, all under the watchful eye of their trainer Ramon Esqueda.

“You live with them 24 hours a day,” Esqueda said. “You become part of the herd. You are the one who provide water and food. They follow you like a matriarch.”

Training these behemoths comes from watching when they are very young at play, evaluating their agility. Then it is a matter of repetition and positive reinforcement to turn them into big top performers.

“Performing, it is a game for them,” Esqueda said. “It is a great feeling to communicate with people and bring this to people, especially the kids.”

Ringling Brothers came to town Tuesday in miles and miles of semis to the Big Sandy Superstore Arena, site of the circus. All day Wednesday crew and performers were throwing up lighting towers that required four miles of electric cable and high wires. The upcoming shows feature 40 moving lights and concert sounds, according to Jason Gibson, production manager.

“This is state of the art, just like what they have at a concert,” he said.

This is the 141st year for the circus that offers a statistic that delights Gibson.

“We are one year older than baseball,” he said. “I love that fact.”

Before each show is a preshow where children and adults can come down on the stage and try out some of their circus skills, like juggling, trying out the low wire or dressing up in costumes.

“We are here to create those lifelong memories for kids of all ages,” he said. “It is about bringing back your childhood. There is nothing like this. This is why Ringling Brothers is still relevant at 141.”

Shows start Thursday and Friday at 7 p.m. at the Big Sandy Superstore Arena, Saturday at 2 p.m. and 6 p.m. and Sunday at 1 p.m. Tickets are $30 for VIP floor seats, $20 and $14 and are available at Ticketmaster or at the arena box office.

Office is located at 307 Madison St. A new drug store isn’t the only thing that CVS brought to Ironton... read more