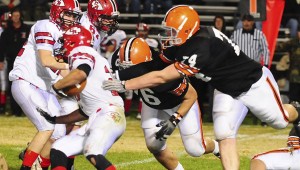 Last year the Ironton Fighting Tigers beat the Sparta Highland Fighting Scots 36-0 in the first round of the Division IV Region 15 playoffs.

Lutz sees a whole different match up this Friday when Ironton (9-2) faces Highland (9-2) in the Division IV Region 15 semifinals at Logan.

“This isn’t our team form last year playing their team from last year,” said Lutz. “They’re better than they were last year. Last year we handled them up front but their linemen are better this time around.”

Last year the Scots ran mostly from the T-formation, but this season prefer the pro formation and variations.

“McAndrew is a good back. He has good speed and he runs well,” said Lutz. “Their quarterback throws the ball pretty well and they’ve got some people who can catch it. They’re more diversified than last year.”

With a senior-dominated defense, Lutz said the Scots allow only 12 points a game. Last week they held Portsmouth West to 7 points and forced six fumbles. West entered the game averaging 35 points a game.

“They’re better defensively. They’re quick and aggressive. They run to the ball well,” said Lutz. “Their nose guard (Eichorn) is big and strong in the middle. We’ll have to come off the ball and stay with our blocks.”

The Associated Press COLUMBUS — It was December of 1974 when Jim Tressel, midway through his senior year at Baldwin-Wallace... read more