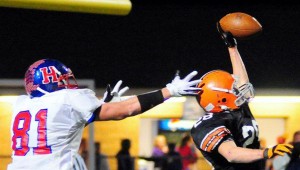 Ironton FIghting Tigers’ defensive back Tres Wilks makes a one-handed interception and returns it 99 yards for a touchdown during a 43-7 rout of Sparta Highland Friday. (The Ironton Tribune / Kent Sanborn of Southern Ohio Sports Photos)

LOGAN — So much for Ironton’s time-consuming ground game.

The Ironton Fighting Tigers still used their ground game, but the longest drive took only 1:09 off the clock and those big plays keyed a 43-7 romp of the Sparta Highland Fighting Scots Friday in the Division IV Region 15 semifinals.

“Any time you put nine and 10 in the box, you run the risk of a guy breaking the plane and going the distance,” said Ironton coach Bob Lutz. “We were able to get a hat on everyone and get into their secondary.”

Quarterback Tommy Waginger got into the Scots’ secondary twice and raced past the defense for touchdown runs of 66 and 61 yards. He finished with 131 yards on just three carries.

“Waginger has done a good job running the team and running the offense. When he runs the option he makes good decisions,” said Lutz.

It marked Ironton’s second win over Highland in two years and also put Ironton in the regional finals for the second straight season. The Fighting Tigers will face Columbus Bishop Hartley (10-2) for the second time this season.

Ironton (10-2) beat Hartley 37-16 earlier this season at home. The regional championship game will be at a neutral site, reportedly back at Logan.

“That game was a lot closer than the final score. They had four turnovers and they have some guys who can go coast-to-coast at any time,” said Lutz.

Highland (9-3) had its running game shut down and the Fighting Scots scrapped their offense for the shotgun in the second half. Highland ran the ball just six times after the break.

While 1,000-yard rusher Artie McAndrew was held to 17 yards on six carries, quarterback Josh Gahm completed 26 of 47 for 232 yards but was intercepted twice including a 99-yard return by Tres Wilks for a touchdown.

The Scots had 62 yards passing in the first half and 45 rushing. Gahm threw the ball 28 times in the second half.

Ironton had no problem with its running game, racking up 369 yards on 42 attempts. Brian Warner ran 12 times for 99 yards and Tyler Hager added 60 yards on six attempts.

The game was scoreless until late in the first quarter when the Scots fumbled a punt and Tyler Kratzenberg recovered at the 14.

Warner scored on the second play of the second quarter from 9 yards out and Waginger’s conversion run put the lead at 8-0 and triggered a 31-point quarter.

After a three-and-out, Ironton got the ball back at its 34. Waginger took just 14 seconds to run the ensuing play as he bolted 66 yards for a touchdown. Tyler Hager’s conversion run pushed the lead to 16-0.

“They were keying on our off-tackle and going after the fullback. That left the outside alleys wide open,” said Waginger.

The Fighting Tigers next possession resulted in a 71-yard, four-play scoring drive aided by a 15-yard facemask penalty at the end of a 21-yard run by Wilks.

Warner ran 21 yards two plays later for the TD and Waginger added a second conversion run and it was 24-0.

Ironton got the ball back with 2:02 to play in the half. The scoring drive took just three plays as Waginger bolted 61 yards for the touchdown with 1:09 left in the half. Josh Murphy kicked the extra point for a 31-0 lead.

The quick scoring continued to start the second half. Ironton went 65 yards in three plays capped by Hager’s 39-yard touchdown run with 10:51 on the third quarter clock and it was 37-0.

Highland went on a 10-play drive to the Ironton 4-yard line to begin the fourth quarter, but the drive ended when Wilks made a one-handed interception a yard shy of the goal line and turned it into his second pick six of the season to open up a 43-0 lead with 7:37 to play.

Highland finally got on the scoreboard against Ironton’s second unit on a 5-yard run by Hayden Mailey with 5:45 to play.

The win was the second in two years for Ironton over Highland. The Fighting Tigers beat the Scots 36-0 in the first round last season.

A decorated mantle display inside a downstairs music room labeled, “Home for the Holiday,” decorated by Weber’s Florist, at the... read more