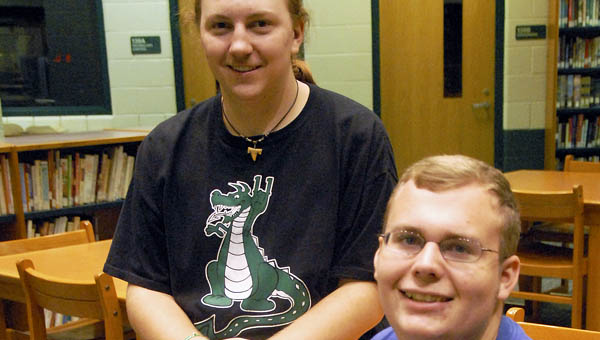 ROME TOWNSHIP — Weekends and summer vacation are times for relaxation. Except for two Fairland High School students who are focused on reaching the highest goal of scouting, the rank of Eagle Scout.

In a few months Nigel Trent and Nick Mannon will have a review of their projects that should lead to their promotion.

Nigel, 18, spent his summer working on the headquarters for Resting House, a counseling ministry affiliated with First Baptist Church of Proctorville.

“They have a house that they bought … and they don’t have much money to put into the house. They’re a non-profit,” he said.

Nigel’s project was to finish up one of the bathrooms on the first floor, including installing a sink and painting the walls. With help from his fellow scouts from Troop 38, Nigel completed the project in six months.

“A good bit was done over the summer and after school and on weekends,” he said. “I think it is great. You have people who are hurt and in bad situations and not everyone helps them out.”

When Nigel graduates this spring from Fairland High, his goal is to study mechanical engineering at West Virginia Institute of Technology and to create a new kind of motorbike — a trike that can maneuver turns like a sports bike.

Nigel, who lives at Miller, has been in scouting since first grade.

“It is quite fun and you get to meet a lot of people and learn a lot of skills,” he said.

Nick Mannon, 17, spent his weekends for about three months with fellow scouts repairing the gravestones at the cemetery adjoining Beulah Baptist Church.

“It has long been in disrepair,” Nick said. “We fixed the stones, setting them up, straightening them and putting them back in rows.”

A member from the church asked if someone from the troop could help at the cemetery.

“Genealogy has already been a hobby of mind,” Nick said. “It is kind of a family thing. My dad and grandpa do it. It runs in the family.”

Nick found gravestones that dated back to the late 1800s including one of a Civil War soldier whose last resting place was at the Beulah cemetery.

When Nick graduates, he wants to study journalism at Northwestern University.

“My goal is to become a columnist in a magazine like “Time” or work for a major newspaper,” Nick said. “It is the act of putting your own opinions out and to try to educate people on why things are good, bad or why things need to change.”

Nick, whose father, Alan Mannon, is the troop’s leader, has been in scouting since second grade.

“I like the camaraderie between people in different age groups,” he said. “There are ages 11 to 18 and they all gel so nicely.”

A new research study in Lawrence County is offering help to those who want to kick the habit. The Ohio... read more