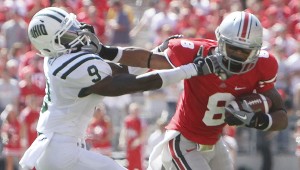 Ohio State wide receiver DeVier Posey (8) fends off his brother Ohio cornerback Julian Posey (9) after making a reception during the first quarter of their game at Ohio Stadium earlier this season. Ohio State faces a tough test Saturday with a road trip to Iowa for a key Big Ten game. (MCT DIRECT Photo)

COLUMBUS — Ohio State wide receiver DeVier Posey thought his prayers had been answered. Long-snapper Jake McQuaide worried about an earlier miss that would have eliminated the need for this overtime field goal.

Linebacker Ross Homan was just relieved that a long, difficult day was finally over.

Devin Barclay’s 39-yard field goal in overtime gave the 10th-ranked Buckeyes a dramatic 27-24 victory over No. 15 Iowa a year ago to boot the Buckeyes all the way to the Rose Bowl.

The two teams meet again on Saturday, with the stakes just as high. No one has forgotten the nail-biter in the gathering darkness in Ohio Stadium on Nov. 14, 2009.

Ohio State, needing a victory to clinch at least a Big Ten title tie and a berth in the Rose Bowl, built a 24-10 lead on touchdown runs by Dan “Boom” Herron and Brandon Saine early in the fourth quarter. The celebration in the stands had already begun.

Iowa, despite being without starting quarterback Ricky Stanzi, refused to buckle.

“Man, it was a really a fight. It was a four-plus-quarter fight,” Homan said. “It was back and forth. They make a play, we make a play. You couldn’t let down for a play. You had to play every play 100 percent or else you were going to lose the game.”

Ahead by two touchdowns with under 11 minutes left, fans started chanting, “Rose Bowl!”

The Hawkeyes would have none of that.

“We kind of thought we had the game sealed up,” said defensive lineman Dexter Larimore. “And then all of a sudden — boom! — they return a kick and we get a three-and-out and they’ve got the ball back and they’re tying the score up.”

With a crowd of 105,455 howling on every snap, the Buckeyes picked up a first down and set up for a 47-yard field goal by Barclay, in just his second game as the kicker. Starter Aaron Pettrey had hurt his right knee after a kickoff two weeks earlier.

Barclay was a former professional soccer player who had once played for the Columbus Crew of Major League Soccer. He kicked a field goal the following week in a victory over Penn State, but had never really been in the crucible of pressure he was facing on this night.

Iowa got the ball back and, with freshman fill-in quarterback James Vandenberg acting like a senior, moved right down the field. Vandenberg hit Marvin McNutt for a 10-yard score with 2:42 left, and Daniel Murray’s point-after conversion tied it at 24.

After the Buckeyes failed to score in regulation, Iowa had the ball first in overtime. On senior night, two veterans made perhaps the biggest plays of their lives.

On third and long, Doug Worthington sacked Vandenberg. Then on fourth down, Vandenberg’s pass was picked off by Anderson Russell.

It was Ohio State’s turn to get the ball and coach Jim Tressel took no chances, running it three times to get to the 22, and then summoning Barclay.

“I remember thinking that we had one earlier in the game that we could have prevented overtime with,” McQuaide said. “Devin was thinking the same thing. That’s just the way you think as a specialist. You put those behind you and you say, ’Here we go.”’

The snap was crisp, backup quarterback Joe Bauserman’s hold was good, the kick was true.

“I just thought my prayers were answered that night,” Posey said. “Barclay, that kick is like a lay-up for him. He’d made it a hundred times during camp. And then I just remember storming the field.”

Larimore remembers mobbing Barclay, who was 26 at the time.

“You don’t want to hurt the old guy,” he said with a laugh.

“Besides the two Michigan wins and besides the Rose Bowl, I’d say it’s up there at the top,” center Mike Brewster said. “You always want to be a part of a team that has an overtime win and the crowd rushes the field. It’s pretty neat.”

Iowa coach Kirk Ferentz has talked about the loss to his players to provide incentive for this year’s meeting.

“They took that ball and jammed it right down our throats last year that second half,” he said. “We better strap it up and be ready.”

Barclay has the game filed away in his memory. Others need visual proof.

“I think my mom probably watches it every day,” he said.

The Associated Press BEREA — If there were any doubts, any lingering questions, any deeper suspicions about whether he could... read more