The brittle is back 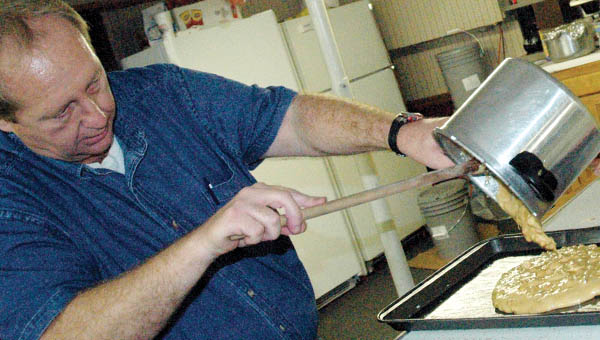 Jerry Burton pours the peanut brittle mixture onto a greased backing sheet. His wife, Debbie Burton, will then shake the tray to spread out the brittle, then drop it to the floor to release all the air bubbles. THE TRIBUNE/MICHELLE GOODMAN

There was a whole lot of shaking (and stirring and cracking) going on down at Greater Faith Apostolic Church in Ironton.

The aroma wafted through the halls, into the sanctuary and down to the basement.

This year marked the fourth year the church on Sixth and Spruce streets got together for the labor-intensive job of making crispy, crunchy, peanut buttery brittle for a fundraiser to put money back into the general church fund.

Pastor Jeremy Sherrill said that the church has had setbacks this year, but the peanut brittle funds would go toward recovery.

“It’s a good fundraiser for our church,” Sherrill said. “It sells itself. It moves pretty good.”

It moves so well in fact, that Sherrill said that some Food Fair stores put in an order of 450 8-ounce tubs of the brittle to be sold in the stores.

He said that a lot of the brittle would be sold to banks and convenience stores or sold door-to-door and by personal phone calls.

Sherrill said that this year’s lot of peanut brittle would be named in honor of a long-time helper of the fundraiser, Ethel Jackson. He said that even though she wouldn’t be helping in the kitchen, she would still be making phone calls to sell Ethel Mae’s Old-Fashioned Candy.

After four days of cooking and packing the brittle, the church would go through 440 pounds of peanuts and about 425 pounds of sugar. They would pack up anywhere from 1,500 to 2,000 containers.

Sherrill said the church began on Thursday and worked from 9 a.m. to 9 p.m. with at least 10 people working per shift.

“When it gets cooler, people know to start asking about it,” said Michelle Brown as she stirred the bubbling peanut, corn syrup and sugar mixture.

Jerry Burton was also stirring a pot on the stove. He said that when the bubbling mixture reaches 305 degrees, it is ready to move onto the next step of the process.

“After you do it for a while, you get an eye for it,” Burton said. He said that the peanuts and the gooey mixture start to turn a golden color, gets thicker and starts to put off a different aroma.

The super-hot mixture must be continually stirred to keep the peanuts from sticking to the bottom of the pan or burning.

When the mixture is ready, it is removed from the heat. Butter, salt and baking soda is then stirred in, making the mixture thicken and rise. When it has finished rising, it is poured onto a baking sheet. Each pot has enough brittle mixture to make three sheets, which makes 12, 4-ounce bags of brittle.

Burton’s wife, Debbie, was waiting on each baking sheet. She would shake the sheet of brittle to spread it out and then drop it on the floor to get out all the air bubbles.

She also said she likes helping with the brittle because she would do anything for the church.

“It brings the church together,” said Carla Clark, also shaking and dropping sheets of brittle.

Clark, a newer member of the church, said that she made her own candies at home and thought that helping with this would help her to get to know everyone.

Jean Conley, also new to the church, helped with breaking up, weighing and packaging the brittle.

It was estimated that each person packaging the brittle made 240 packs per hour.

Helping students deal with and prevent bullying is a task that will not be completed overnight, and staff at Dawson-Bryant... read more