Ironton gets its Christmas tree 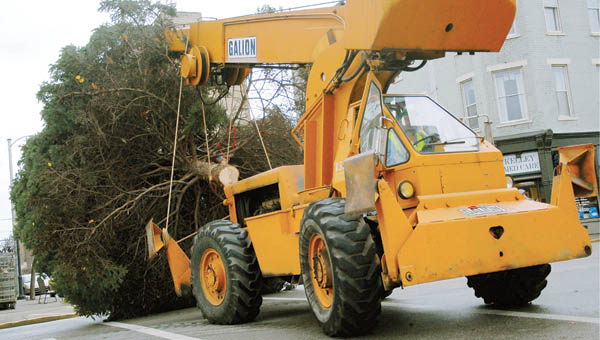 Workers from the City of Ironton make their way down Center Street with this year’s downtown Christmas tree to Rotary Square. The tree donated by the Owens family is the largest the city has put up.

It’s common this time of year to see Christmas trees strapped to the tops of cars and in the backs of pickup trucks. A little less common is seeing a rubber-tire crane hauling a 16 by 18-foot Blue Spruce tree down Fourth Street in Ironton.

That was the scene Tuesday afternoon as city workers transported the city Christmas tree downtown to its spot next to the Rotary Fountain on Third Street.

The tree will be decorated with clear lights, though street superintendent Mike Pemberton said the city would welcome any civic group that wanted to decorate the tree even further.

For the past couple of years the city has had smaller Christmas trees, but this year officials decided to get a large one.

The Owens family from South Seventh Street donated this year’s tree. Pemberton was driving around town when he noticed the tree. So he stopped and asked them if they’d be willing to donate it to the city. They agreed.

Mayor Rich Blankenship said the family told him they just want to do something nice for the city.

“We certainly appreciate it,” Blankenship said.