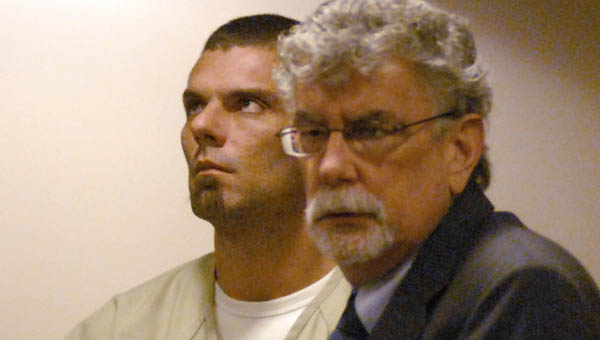 Dennis Clark, 38, of Ironton, appeared in Lawrence County Municipal Court on Wednesday morning and was arraigned under the amended charge of felony murder after a man he allegedly assaulted on Nov. 11 died of head trauma on Tuesday.

Clark had been held in the Lawrence County Jail since Nov. 11 after he was arrested for assaulting Eddie Thibodaux, 40, also of Ironton, at the Marlow Grill on South Third Street.

Thibodaux was found unresponsive by the Ironton Police Department after they responded to the reported assault outside of the Marlow Grill. Thibodaux was then taken to King’s Daughters Medical Center and later transferred to Cabell Huntington Hospital.

“I think its fair because hopefully he cannot come up with it, is how I feel,” said Cathy Bazell. “People like that are a danger to society.”

Bazell said she was a good friend of Thibodaux’s and was in the courtroom with her cousin for Clark’s arraignment.

Bazell said that she had known Thibodaux for five years and that his family decided to take him off of life support on Tuesday evening.

“I can say that Eddie was a very good, decent, gentle human being that did not deserve what happened to him,” she said. “I hope that he gets the justice that he deserves.”

Clark is scheduled to appear back in court on Dec. 9 for a preliminary hearing.