MOLD: Something to sneeze at? 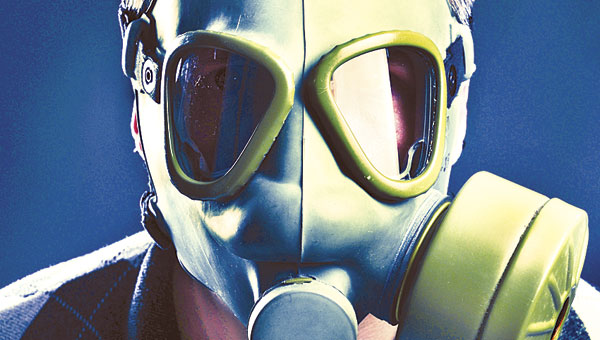 Although no one has to wear masks at the Ironton Social Security Administration office, the debate continues over whether or not black mold inside the building is a hazard to the employees and the public.

A little more than two weeks after the union representing employees at the Social Security Administration’s Ironton office demanded the facility be closed due to black mold problems, SSA officials say results of a new investigation show no signs of hazardous substances.

“There’s no evidence from any of the studies, the current studies or the previous ones, that established that there is an unsafe or unhealthy work environment in Ironton,” said Doug Nguyen, deputy regional communications director for the SSA. “We believe we can continue to provide service to the public from its current location without closing the office.”

Nguyen said that the results of the mold spore sampling report that was conducted on Nov. 2 showed similar results to those of tests that were performed last year.

Nguyen said that the General Services Administration contracted an environmental company to perform the most recent test.

The company, ARCADIS U.S., Inc. tested areas inside and outside of the Ironton SSA office including a multi-purpose room, the central service counter, south work area and outside near the employee entrance.

“Air is drawn through the Air-O-Cell cassette and the air goes through a little slit and then the air impacts on to a slide that is greased and the particles impact onto the slide and then the spores stick to the slide,” Young said. “Then the spores can be put underneath a microscope for examination.”

Young also said the test is one of the most common for testing mold spores.

According to the report’s summary of key findings, “Visible suspect mold was present at various locations along the perimeter wall, especially at the seams of the wallpaper. The extent of the mold could not be determined without more intrusive investigation.”

A photograph of black mold on a wall seam at the Ironton Social Security Administration office. The union and SSA officials remain at odds over the health impact.

Young also said, “There’s no way to know how extensive it is without removing all the wall paper or doing some other type of intrusive look like cutting a hole in the wall.”

The report also stated, “The total concentration of airborne mold spores was lower in the indoor air when compared to the results for the sample collected outdoors. These results, independent of visual observations, are not suggestive of an indoor mold growth condition.”

Young said that ARCADIS did not make a recommendation whether the mold in the Ironton SSA office was harmful or not.

“We just reported what we found,” he said. “That’s a decision that has to be made by a physician, whether the environment is harmful to anybody.”

David Wilkinson, regional public affairs officer for the GSA, agreed that ARCADIS was not brought in to determine whether or not the Ironton SSA office was a harmful environment.

“They’re hired to get a technical count of mold in the air both inside and out,” he said. “GSA goes to the EPA, NIOSH and also to OSHA to follow their guidelines on determining whether there’s severe mold problems.”

Wilkinson said that because of the results of the testing, the GSA didn’t feel it was necessary to close the office.

David Sheagley, president of the American Federation of Government Employees Local 3448, is the union official who demanded that the office be shut down early this month. Sheagley said he is still not satisfied with the new testing.

“What I’m told by the CDC is that air quality testing when there is black mold evident is not the way to determine if it’s safe or not safe,” he said. “It’s not safe. There’s black mold, that’s evident. And they put tape over it to try and keep it in place, which is also not safe.”

“The SSA may be sincerely hanging their hat on that, they may be misinformed, they may be attempting to avoid doing anything. But I know that the people I represent there are sick and they have testimony that’s rather persuasive, to me at least, that their illness is related to being in that workplace.”

Sheagley also said that nine out of 11 employees in that office have filed worker’s compensation claims.

“We’ve got a number of employees who have respiratory issues that they didn’t have before,” he said. “Absenteeism is a problem in that office because people are sick. People are constantly coughing, sniffling, sore throats, headaches. There’s a health problem there.”

Sheagley said that the workers have told him, as well as management, that when they are away from the office for several days or a week they feel better, but when they return, their symptoms return.

“I don’t think it’s very reasonable to assume that it’s some kind of psychosomatic reaction over a period of many, many months, going on a year now,” he said.

According to a press statement by AFGE that was released on Nov. 9, a local representative first observed the mold early last summer.

An indoor air quality survey report was requested by the SSA and was performed on Sept. 15, 2009, by Dennis Bridge of the Federal Occupational Health Agency.

The report made recommendations to seal areas of wallpaper where the suspect mold was visible and to determine the extent of the mold within the office.

There was also a follow-up report done by Dennis Bridge of FOH in August of this year. It stated, “Conditions of the office remain essentially the same as in September 2009.”

The report also stated that the areas with suspect mold had been covered with clear tape, but “no attempt had been made to investigate the extent to which mold had proliferated beneath wallpaper or in wall cavities.”

Valerie Maltman, a contractor for All Season’s Home Improvement of Huntington, W.Va., said she remembered being called last year to take at look at the mold situation in the Ironton SSA office.

Maltman said that, even though she is a residential contractor, she was not licensed in Ohio to do the commercial work. Maltman said she still urged the SSA to get it taken care of as soon as possible.

“There is a little bit of mold in people’s houses down in the basement or something, maybe in a crawl space, but I have not ever run into that much mold in a residential house,” she said. “Even half of that much mold. That’s a lot in there.”

Maltman also said that she was surprised the mold hadn’t been taken care of before now.

“In my opinion, I know I’m a woman, but I am a contractor, a third generation contractor actually, and that’s the worst I’ve ever seen,” she said. “We do a lot of waterproofing where we run into mold but I’ve never seen anywhere near that much mold in a residential home, even if it’s a dilapidated house that hadn’t been touched for years.”

Jeffery Stephenson, the owner of the building that the SSA leases, did not want to comment about the building. Stephenson directed questions to Ironton attorney Warren Morford.

Morford said the claims of harmful mold by the union were completely false.

“We’re going to file litigation,” he said. “We are planning litigation against the SSA, GSA and also the union for releasing that defamatory, libelous statement. They are trying to do nothing but create a panic environment, where nothing to get panicked about exists.”

Morford also said his client has never seen any workers’ compensation claims from the employees in the SSA office.

“We had a study done several years ago. It showed that there was no harmful mold or other harmful, toxic substances in the inside air of Mr. Stephenson’s building,” he said.

“As a matter of fact, our studies, as does the SSA’s own studies, show that the air inside the building is better than the air outside the building. We are unaware of anybody claiming any adverse health effects. We have not been shown the first document that even alleges that.”

Morford said that, if there is indeed a mold problem in the Ironton SSA office, it is due to portable air units that were installed by the GSA.

“They defeat the sophisticated system that Mr. Stephenson had installed several years ago,” Morford said.

“They run that, it produces and artificial atmosphere and creates more moisture. And if there is any mold growing from it or anything else, that would be the source of it, their own machines, which we have repeatedly demanded to be taken out of there.

Wilkinson of the GSA said of the units, “The reason it’s in there is that it has helped alleviate problems the SSA employees had with the heating and cooling unit of the building. And it really has nothing to do with humidity and it’s there at SSA’s request.”

He also said the GSA plans to make sure the mold stays contained in the areas that it is currently in.

Morford urged the union to retract the press release about closing the SSA office, saying it would be the first step to halting any litigation.

“We have timely responded to all their requests for things I would advise my client not even to do, but he’s bent over backwards to accommodate his tenants. This is the gratitude he gets.”

Sheagley said there should be an alternative for the union members working in the SSA office.

“It needs to be cleaned up before they precede with another work day, but they refuse to do it because they’re saying that there is no evidence that there’s spores in the air. Well, they’re not listening to their employees at all, and the employees believe they are sick.”

Several employees in the office either declined to talk about the issue or were not able to be reached for comment.

Sheagley also said that the workers’ compensation claims were denied based on a lack of medical evidence, but that they have gone back to gather more evidence and hope the Department of Labor will reconsider.

Sheagley also said he still believes that further testing should be done at the building.

“I’m just trying to make people aware of it, that it’s a problem, put pressure on them to do something,” he said. “They’re playing a risky game there.”

Currently, a new SSA office is being built on the corner of Seventh and Vernon streets. Construction began in September and is slated to finish in the summer of 2011.

Wilkinson said the mold issue did not play a part in a new facility.

“The space layout in the present location is based on SSA requirements that were current 12 or more years ago.  Those are now obsolete,” he said. “For example, today’s requirements call for a different amount and new arrangement of space for security and for interviewing the public.”

“To remove an existing layout and simultaneously install a new one would not be practical. It would probably required closing the office,” he said.

“The acceptable alternative was to find a new location with unoccupied space, build it out, move in and put the new system into operation.  Improved office efficiency and good service to the public are important factors in the total process.”

The Associated Press COLUMBUS — David Lighty wasn’t even aware it was his 100th career victory until someone told him.... read more