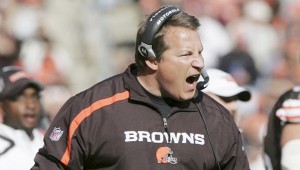 Cleveland Browns’ head coach Eric Mangini had mixed emotions after his team held on for a 24-23 win over the Carolina Panthers on Sunday. (MCT DIRECT)

BEREA — Eric Mangini’s face was drained and strangely expressionless, hardly what you would expect from a winning coach.

Seconds after Cleveland’s heart-stopping 24-23 win over Carolina on Sunday, a game decided when Panthers kicker John Kasay banged his last-second, 42-yard field-goal attempt off the left upright, a stoic Mangini wandered off the field in a daze.

He was spent. He was jubilant. He was sick to his stomach.

“A mixture of pain and happiness,” Mangini said of his overriding emotion. “I was angry and happy at the same time.”

Such is life coaching the Browns, the NFL’s masters of macabre.

No team experiences victory’s thrill and defeat’s agony — in the same game — quite like this squad.

But for one of the few times this season, the Browns (4-7), riddled by injuries to their quarterbacks and saddled with a string of gut-wrenching losses, caught a break. The usually reliable Kasay, among the career leaders in field goals and points, missed.

The Browns nearly gave one away, but were able to hang on, overcoming two interceptions by quarterback Jake Delhomme and another bout of brutal tackling in the final minute, misses that allowed the Panthers to move the ball close enough to give Kasay a chance.

As Kasay lined up, the Browns prepped for the worst.

“It was like ’Oh God, here we go again’,” cornerback Sheldon Brown said. “It’s one of those things where again it comes down to the last play, and you know in your heart you should not be in that situation. There’s no reason for it. There are plenty other games throughout the course of the season when we dominated the game for 30 minutes and we had 10 or 15 minutes where we look like the Bad News Bears.”

Delhomme, back in the starting lineup to replace injured rookie Colt McCoy, threw two interception against his former team and nearly cost the Browns what should have been an easy, runaway win. His first two passes in the third quarter were picked, with Carolina’s Captain Munnerlyn returning the second 37 yards to pull the Panthers within 21-20.

Delhomme won, but barely. And a day later, Mangini remained noncommittal on his convoluted quarterback situation.

McCoy was in a walking boot Sunday and it’s not known how long he’ll be sidelined with a high ankle sprain — the same injury that shelved Delhomme and Seneca Wallace. Mangini will wait until later this week before announcing his starter in Miami.

“I haven’t gotten that far,” he said when asked if he’s leaning toward Delhomme. “I just want to look at some Miami tape, get a better sense of the challenges they present and look at it in that context as opposed to just making a decision right now without really doing that component of it.”

Delhomme showed some rust in his first home start, and he also displayed the same bad habit of forcing passes. The 35-year-old finished 24 of 35 for 245 yards and had the offense humming at time, but Cleveland fans focused on his two interceptions and fumble.

Mangini was complimentary and critical of Delhomme’s outing.

“Look,” Mangini said, “Jake did a ton of stuff yesterday that was really, really good. He gave us an opportunity to run the ball like we ran the ball. His leadership this week was outstanding. You can’t look past that, either. He put us in a lot of good positions. What you want to do is eliminate those mistakes that become gigantic mistakes.”

He’s thrown six interceptions, and only one touchdown this season. It continues a disturbing stretch for Delhomme, who has now thrown 29 interceptions in his last 15 games. The Panthers cut him in March after he threw a career-high 18 picks last season.

To be fair, Delhomme had not started since Sept. 12 and he was going against the Panthers, who know him better than anyone. But there is no excuse for taking unnecessary chances. Delhomme took too many.

He should have known better. After all, Sunday was Delhomme’s 100th career NFL game. Mangini hopes the next time Delhomme’s faced with a choice, he’ll make the safe one.

Mangini has experience with a gunslinging quarterback unafraid to push the limits. Brett Favre, after all, aged him in New York.

“I had a year with someone who’s a known chance-taker, so I’ve lived through that,” Mangini said. “There’s great positives, and some plays that it doesn’t work on. You just want to play the odds.”

By JIM WALKER Tribune Sports Editor For the Ironton Fighting Tigers, it was quite a season. And a look at... read more