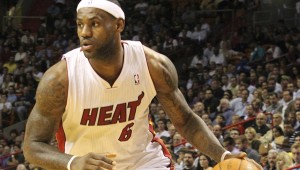 Miami’s LeBron James returns to Cleveland for the first time on Thursday after leaving the team in the offseason to sign a free agent contract with the Heat. James is expected to be heavily booed and jeered by the Cavalier fans.MCT DIRECT)

That’s one reason why Williams is looking forward to Thursday night, when James makes his long-awaited return to Cleveland as a member of the Miami Heat. The Cavaliers guard understands why fans around the region still feel betrayed about James’ departure after playing in Cleveland for seven years.

“It’s definitely more than a game, I can tell you that,” Williams said. “This game has been circled. There’s a lot of playoff feeling going on.”

Williams says he and the Cavaliers are excited about the opportunity to face their former teammate, who led the franchise to the NBA Finals in 2007 and to the league’s best record the last two seasons.

“The whole world is watching,” Williams said. “It’s something that will go in the history books. I’ll be a part of it. I’m proud of that.”

Williams, acquired from Milwaukee prior to the 2008-09 season, was more troubled by James’ decision to leave that any player still on the team. He was quoted in a story during the summer that he considered retirement, comments which he backtracked on at the team’s media day.

Williams and James had a chance meeting after “The Decision” in which they cleared the air. Williams said they have not spoken since.

If any Cleveland players feel resentment toward James, they’re keeping it to themselves.

“I think we are all looking forward,” guard Daniel Gibson said. “We’re ready for the opportunity. He did what he had to do and it’s a matter of us doing what we have to do. That was the approach we took from day one and that’s the approach we still have.”

Gibson came to Cleveland as a 20-year-old rookie out of the University of Texas in 2006. He said he and James still keep in touch.

“He looked out for me,” Gibson said. “He showed me the ropes, and now it’s time for me to go out and help this team win and beat a team that we want to beat. You can best believe it won’t be anything nice when we get out on the floor together. You won’t know that he taught me. You won’t know that we’re friends. I’m going right at him. Then, after the game, we say our goodbyes.”

While the subject of whether James misses Cleveland hasn’t come up in their conversations, Gibson believes that is indeed the case.

“For you to play here the amount of time he did, there’s no way in your heart of hearts, the way the fans cheer for you, the way the city shows love out here,” Gibson said. “You have to. Without saying it, he probably does. But that’s neither here nor there. (Thursday) night, it’s about basketball.”

Williams expects James will be booed and heckled, but hopes the fans’ reaction doesn’t go beyond that.

“I understand the frustrations,” he said. “I had the same frustrations, but when the results are something violent or the possibility of that, I think that’s outside of basketball and outside of everything we stand for as an organization. Once we start talking about harming people and their well-being, that’s taking it a little too far.”

“When he made his decision, it took me about five minutes to move on,” Scott said. “I never had him. You can’t miss what you never had.”

Scott has been in the league for more than 25 years as a player, assistant and head coach. He can’t recall one player generating the negative reaction from one city as James has received in Cleveland.

“I can’t remember anything like this,” Scott said. “Let’s just leave it as is. We have great fans. I think they’re going to come out and cheer us on.”

Scott was jokingly asked if the Cavaliers might look past the Heat in anticipation of Saturday night’s game with Minnesota.

“I don’t think there’s a concern whatsoever,” he said, “we’re going to overlook this game.”