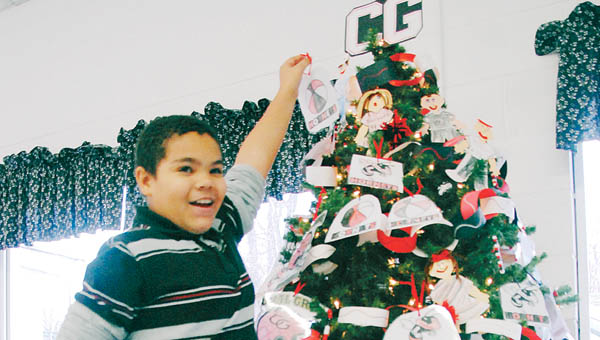 COAL GROVE — As the snow was falling yesterday, children from Dawson-Bryant Elementary were bringing their own touch of Christmas to the Jae Roush Community Building.

A class of fifth graders brought their handmade Hornet Pride ornaments to decorate the Christmas tree in the community building, just as the children before them have done for the past 15 years.

Vickie McDaniel, president of the Coal Grove Betterment Club, said it is a yearly tradition to have the children come and decorate the tree. She also said the decorations are different every year because the children make them themselves.

“It gives the kids something to look forward to,” she said as she was handing out cookies to the children.

Fifth-grader Austin Layne said, “We made these candy canes,” as he held up his handiwork. A seasoned pro, he said he has been decorating Christmas trees since he was 3 years old.

Austin also said he had fun decorating the tree.

“It’s fun to get out of school a little bit and play around,” he said.

Nicole Payne held up a Coal Grove cheerleader that she colored for the tree. She even put a red and black pom-pom on it.

Virgil Petty said, “I made a football helmet and a sports person,” as he beamed with pride after he placed them on the tree.

Each ornament, whether it be a Coal Grove helmet, a basketball player, a candy cane or a hornet, was carefully colored and crafted and each was placed with great care on the tree that was also adorned with lights and black and red streamers.

“I think it gives them a sense of being a part of the community,” said Tammy Nutter, a Coal Grove Betterment Club member.

She said it made the tree more special because they made the ornaments.

“And hopefully it gives them good memories,” she said.

Village gearing up for parade

COAL GROVE — Nothing puts people into the holiday spirit quite like a good old-fashioned Christmas parade. This Friday, people... read more