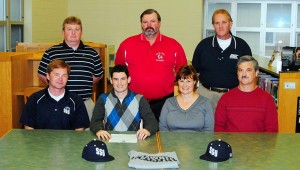 The Rock Hill Redmen senior pitcher has been attending college showcases — tryouts conducted by college baseball coaches — since he was a freshman. One of the showcases he made a frequent stop at was Shawnee State University.

The left-hander made enough of an impression on head coach Ted Tom that he signed Hackworth to a letter-of-intent before his senior high school season even begins.

“I’ve been going to their showcases since I was a freshman and I guess when they got their evaluations back they could see something they liked and they started showing more interest,” said Hackworth.

That was just fine with Hackworth who said Shawnee State was at the top of his list from day one.

“I went to a few other (showcases) and got some little bites, but I’ve always been interested in Shawnee State,” said Hackworth. “They have an up and coming program, they won the conference last year, they have great coaches and they seem to be doing things right.”

The Shawnee State head coach said that Hackworth’s continued attendance at the Golden Bears showcases caught his attention and led him to signing the pitcher.

“Ryan has a great work ethic and he continued to get better each time we saw him.”

Getting his name on the dotted line early was another thing that has eased the pressure for Hackworth.

“That was one of the things I wanted to do. I wanted to focus on the high school season and not be distracted by the whole recruiting thing,” said Hackworth.

Rock Hill coach Barry Litteral said Hackworth has been focused on having a good senior season.

“We’re going to rely on Ryan this year. We relied on him last year and he threw some big games for us,” said Litteral. “He’s going to be a workhorse and he’s been working in the off-season trying to make himself better.”

Although he will be just a freshman on a strong program, Hackworth doesn’t plan to sit back and wait. He knows it won’t be easy, but he plans to make a push for playing time early.

“I’d like to go in and make a difference right away, but we’ll have to see how things go. They have very few left-handed pitchers,” said Hackworth.

“Obviously, I have to get bigger, faster, stronger. I have to work on all aspects of pitching.”

Tom said there is no timetable for Hackworth to play, but he said the opportunity is there.

“Physically he may be ready, but maybe not mentally. He’ll be playing against guys who might be 22, 23 years old and have more years of experience,” said Tom.

“He’ll have the opportunity. With the way college baseball is, you can never have enough pitching. Being left-handed he brings something else to the table. If he can come in and show he can get guys out, he’ll get more playing time but that’s up to him.”

Hackworth is undecided about a major but said he wants “to do something health science related.”

By JIM WALKER Tribune Sports Editor When you score 93 points and win your opening game, you have to be... read more