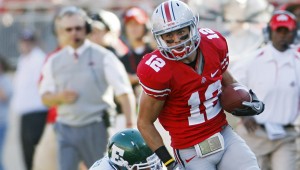 NEW ORLEANS — Three seasons after Bobby Petrino took over as Arkansas’ coach, the Razorbacks are going to their first BCS game.

The Sugar Bowl announced on Sunday that its Jan. 4 matchup would feature the eighth-ranked Razorbacks and No. 6 Ohio State in what also will be the first meeting of the teams.

“In going to BCS game, it’s a tremendous accomplishment for our football team,” Petrino said. “It’s something when we came here as staff three years ago that was one of our goals. … It’s exciting to be able to know you’re going to play a big bowl game against one of the top programs in the country.”

Arkansas (10-2) has been to five previous Sugar Bowls, all before the BCS era, going 1-4 in those games.

The Razorbacks’ last appearance came in 1980 with Lou Holtz as coach. The Hogs were in the Southwest Conference then and lost to 1979 SEC and national champion Alabama and coach Bear Bryant.

Ohio State (11-1), which won a share of the Big Ten title this year, last played a postseason game in New Orleans in the Buckeyes’ BCS title game loss to LSU at the end of the 2007 season.

Buckeyes coach Jim Tressel, who was also celebrating his 58th birthday on Sunday, said he was excited about his return to the Big Easy with a roster featuring many players who weren’t with the program for the last trip.

“You couldn’t have a better birthday than being invited to the Allstate Sugar Bowl,” Tressel said. “Eighty percent of our team hasn’t been there before and they know they’re going against a great football team. Any time you get to match up two teams in the top 10 you get excited about that opportunity.”

The Buckeyes have been in three previous Sugar Bowls, going 1-2. Their last appearance came at the end of the 1998 season, when they defeated Texas A&M.

Both teams feature talented and successful quarterbacks, albeit of different styles.

Arkansas’ Ryan Mallett and Ohio State’s Terrelle Pryor are finalists for the Manning Award, which the Sugar Bowl presents each year to the top quarterback in the country.

Mallett, who transferred to Arkansas from Ohio State’s archrival, Michigan, has thrown for 3,592 yards and 30 touchdowns for the Hogs this season. He threw for 300 or more yards in a game nine times this season.

“We’re very familiar with Ryan Mallett because, of course, we played against him when he was at the University of Michigan,” Tressel said. “In fact, I was hoping we were done with him when he transferred and here we are getting him when he’s at the height of his career. He’s a tremendous football player, lightning-quick release, smart as a whip, you can tell.”

Pryor has 2,551 yards passing and 25 touchdowns through the air. Unlike Mallett, Pryor is known for his scrambling ability and has rushed for 639 yards and four TDs this season.

Petrino said there are some similarities between Pryor and another quarterback that beat Arkansas earlier this season, Auburn’s Cam Newton.

“Their size and strength and ability to run,” Petrino said. “They’re both tremendous football players, great leaders and had a lot of success in knowing how to win games.”

Arkansas, which finished second in the SEC West behind Auburn, averaged 489.25 yards per game and scored 30 or more points in 10 games. Sophomore running back Knile Davis played a big role in that, gaining 1,183 yards on the ground.

Petrino will have a bit of a scouting advantage against Ohio State, however. The Arkansas coach’s brother, Paul, is the offensive coordinator for Illinois, one of the Buckeyes’ Big Ten foes.

“I really haven’t talked to Paul about them yet but I certainly will. Hopefully he can help me out a lot,” Petrino said. “We talk every week and we did throughout this season. … They spent an entire week preparing for them and they also watched them throughout the year. You learn a lot about a team from watching them play the other opponents you’re trying to prepare for. I’ll try to get him on the phone as long as I possibly can.”