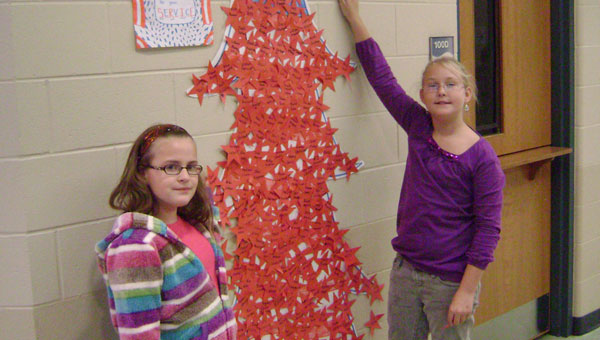 Halle Moore and Cierra Conley, fifth graders at Dawson-Bryant Elementary School, place stars on the school’s veteran tree. About 225 names of current and former service men and women have been placed on the tree.

COAL GROVE — Veterans Day may have been nearly a month ago, but students at Dawson-Bryant Elementary are still showing their thanks.

“We felt that it was more than just that one day,” said Dannie Newman, elementary counselor at the school. He said the children are taught that heroes are those who sacrifice, give unselfishly and put their life on the line for our country.

Newman has worked with the students to collect the names of veterans and current service men and women to be placed on a tree in the school’s main hall.

Newman said the project was a way to honor and show support for the veterans. He also said that about 225 names have been placed on the tree.

Fifth grade teacher Ronda Hall also started a “Hero Board” to help honor veterans. Newman said Hall was inspired to start the board because she was Justin Allen’s fifth grade teacher. Allen, whose name is in the center of the board, was an Army Ranger who was killed this summer while serving in Afghanistan.

The “Hero Board” features pictures of veterans from as far back as World War II all the way up to service men and women who are currently in active duty.

Moore said that at least 600 cards have been made, with some being sent overseas and some going to veterans in local nursing homes. The American Legion will deliver the cards to the area nursing homes.

Moore said that these activities give the students a connection with the veterans and brings a realization of what the veterans are doing for our country.

Both Moore and Newman agreed that veterans should be honored year-round and the students will continue to make cards to be sent to local veterans at each holiday.

“I’m really proud of the support that the kids give,” Moore said. “They are all willing and I’m proud of that.”

Flu Vaccines: Nothing to sneeze at

The Centers for Disease Control and Prevention estimates more than 200,000 people are hospitalized for flu-related complications each year. This... read more