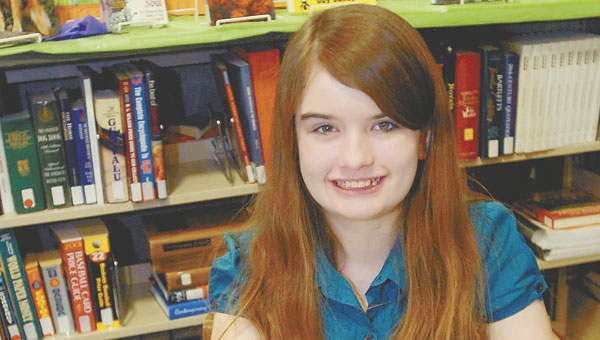 The competition was held Wednesday in the Ironton City Center.

During last school year, Felicity moved on from the county bee to win the regional spelling bee in Columbus and then competed in the national bee.

And while she is proud to have won the local competition, she already has her eyes on competing in the national competition again this school year.

“It feels great that I did it again and I know I have an opportunity to go back to Washington D.C.,” Jenkins said.

Jenkins said that, while the competition is heavier at the nationals, the county bee has its pressures too because she had won it three years before this year.

“The county bee has less competition but it’s still a challenge,” she said.

This year the seventh grader won on the word “shrapnel.”

Now that the county bee is over, Felicity said she plans to take a short break from studying before preparing for the state and, hopefully, the national competition. She plans to study from a 23,000-word list compiled for the national bee in addition to studying word roots.

“I’m trying to do everything I can to win,” she said.

If she doesn’t win the national competition, Felicity at least hopes to make it to the semifinals. When she competed at nationals last time, she was a mere two points away from the semifinals.

“I just have to give God the glory because he enabled me to do this and thank my parents because they spent so much time working with words with me,” Felicity said.

With 2010 winding down, Lawrence County Relay for Life organizers are already gearing up for another year. The kickoff for... read more