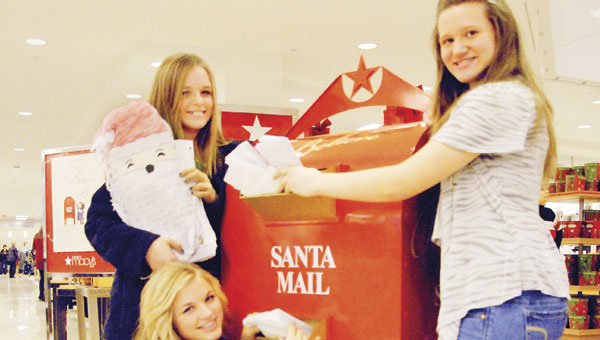 Tiara Hatfield, right, seen with her friends Meranda Hayes, center, and Hannah Mays, left, dropped off more than 500 letters for Santa at Macy’s in Huntington, W.Va. Tiara urged area children to write letters to Santa. Macy’s has agreed to donate $1 to the Make-a-Wish Foundation for each letter.

For those who have forgotten how to believe in the power of Christmas and the season of unconditional giving, one only has to hear Tiara Hatfield’s story.

Tiara is a 12-year-old girl who has made it her mission to make other children’s dreams come true.

Tiara’s cousin, 12-year-old Janie Hatfield, made a wish to visit Hawaii with her family and swim with the dolphins. Having been diagnosed with bone cancer, Janie’s dream was realized through the Make-A-Wish Foundation before she passed away.

“When she got sick, that’s what she wanted to do,” said Rena Hatfield, Tiara’s mother. Janie’s father, Wallace, had been stationed in Hawaii during in service in the Marines.

“She wanted to go over and see where all the stories he told of,” Rena said. “She took the family over there. They took a picture of her staring out over the ocean and that’s actually the picture that’s etched on her stone.”

A few weeks ago, Tiara decided she wanted to make a difference in the lives of children with life-threatening medical conditions. Her mother said it all began with a television commercial for Macy’s Santa Mail project.

“We were sitting here watching TV and the Macy’s commercial came on, and it stated for every letter that was brought in for Santa, $1 would be donated to Make-a-Wish,” Rena said. “She said that she wanted to talk to her teacher and to the principal to see if there was anyway maybe they could do that at her school.”

“I thought if we would do it, it would make other kids happy,” Tiara said.

Tiara said she started the process by speaking with her teacher at Symmes Valley Junior High School, Lee Ann Klaiber. After she got the green light from Klaiber, she went to her principal, Jeremy Newman.

“He said it was a great idea too,” Tiara said. “If we got all of the stuff put together we could do it.”

Tiara then employed her friends, Meranda Hayes and Hannah Mays, to help spread the word to each classroom.

“They wrote a nice letter that stated to the other students and parents what they were trying to do,” said Newman. “We’re real proud anytime students try to make a difference on their own. It shows a lot of character on their part.”

About three weeks later, Tiara had collected more than 300 letters from the students at Symmes Valley Elementary and Junior High to be placed in the “Believe Station” mailbox at the Macy’s in Huntington Mall in Barbourville, W.Va.

She also collected an additional 504 letters from the Rock Hill School district and Symmes Valley combined to be placed in the Macy’s mailbox on Friday. Friday, being National Believe Day, Macy’s doubled their $1 donation for every letter that was dropped in the mailbox that day.

Tiara’s mother said that this project could potentially change her daughter’s life.

“She could be the type of person to raise money for that type of stuff, big money for it,” Rena said. “It really got her excited about it. I was real proud of her. Me and Tony, her dad, both were.”

Tiara said the project has made her feel good as well.

“It makes me feel good because just a little school like ours can make a difference in people’s lives.”

She is also thinking ahead to other ways she can raise money for the Make-A-Wish Foundation.

“I was thinking, I’m on the basketball team, I was thinking about doing a tournament, maybe one or two days. And all the money we get goes to (Make-A-Wish),” she said.

“I feel really good and stuff because I know that we’re helping some little kid or a couple of kids have their last dream before they pass away.”

Tiara said she would be collecting letters until school lets out for Christmas break.

Rena said Tiara has encouraged children to write the letters, even if they don’t believe in Santa Claus.

“Believe in Make-A-Wish because Make-A-Wish is like Santa Claus, is how she said it,” Rena said. “It does make dreams come true.”

Ironton approved for feasibility study The City of Ironton is in the beginning stages of what Mayor Rich Blankenship hopes... read more