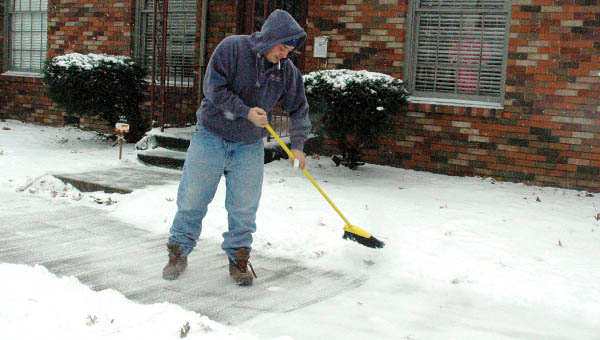 Chris Russell, sweeping the freshly fallen snow from the sidewalk in front of his and his neighbor’s home on Walnut Street. Russell said he had been up since 5 a.m. and had already cleared his walkway once before. THE TRIBUNE/MICHELLE GOODMAN

Ice and snow are making Lawrence County roads slow going today. The snowfall started Sunday night and is expected to produce 2 to 4 inches of snow, according to the National Weather Service out of Charleston, W.Va.

A winter weather advisory is in effect now until 1 a.m. Tuesday.

The weather caused every school district in Lawrence County to be closed Monday.

In Ironton, city workers were out around 11:30 p.m. to after midnight treating the roads and then started again before 6 a.m. this morning, Mike Pemberton, streets superintendent, said. The workers salted the hill areas and overpasses, Pemberton said.

He added that workers will be out throughout the day as snow continues to fall.

“We’ll just apply it as we see that it’s needed,” he said. “People just got to take caution driving in it.”

Pemberton said the city is limited to what areas it can treat because of its street budget.

Sunday in Ironton, a power outage affected about 1200 people, but was not weather-related, AEP spokesperson Vikki Michalski said.

The outage was caused by an underground cable that failed, she said. The power outage occurred around 10:28 a.m. and power had been restored by 3:40 p.m., she said.

Elsewhere in the county, the snow had caused a few people to slide off the road, Lt. Mike Gore from the Ohio State Highway Patrol, said.

“There are no injuries that I’m aware of, we’re just pulling people out of the ditches,” Gore said.

District 9 of the Ohio Department of Transportation, which includes Lawrence County, reports that routes in the area are snow covered and that blowing and drifting snow continue to cover cleared sections of roadways. The drifting snow is especially a problem in curves and along flat, open areas of highway. Ice is likely to be present on the roadways, as well.

Armed with a goodie box all for herself, Lilly Zornes, daughter of Jay and Bekki Zornes of Ironton, eyes the... read more