Bring on the snow! 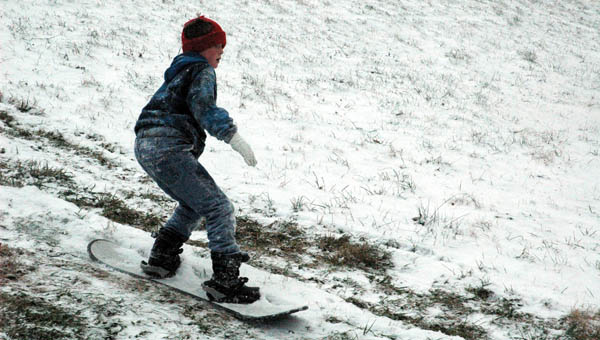 While recent snowfall has made roadways slick and traveling dangerous, not everyone was unhappy about the weather.

After the winter storm caused school to be canceled all over the region, several braved the snow for some sledding.

Among them was Austin Bell, a 14-year-old student at Ironton High School who sledded on Molten Field.

The freshman said getting out of class was his favorite part of the winter weather.

“(I thought) yes, I get to sleep in,” he said about hearing that school was canceled.

Bell and his friends typically sled elsewhere in the city but decided to go to Molten this time.

Junie Depriest and his son, Bryce Depriest, enjoyed a day off of work and school respectively and also spent the morning at Molten Field.

On his first time down the hill, Bryce’s inner tube hit a rock and burst, but Depriest said that wouldn’t stop them. “We’ve have to go get another one,” he said.

Several others sledded on a hill at the corner of North Fourth and Orchard streets Monday afternoon.

Tasha dressed in layers- five pairs of pants, a sweatshirt and a jacket- and went sledding with about five of her friends.

Her friend, Tyler Markel, kept warm in his camouflage hunting overalls, a coat and a hat.

“(I like to go sledding) because it’s fun and you get to go fast on the hill,” she said. “The snow is fun to play in.”