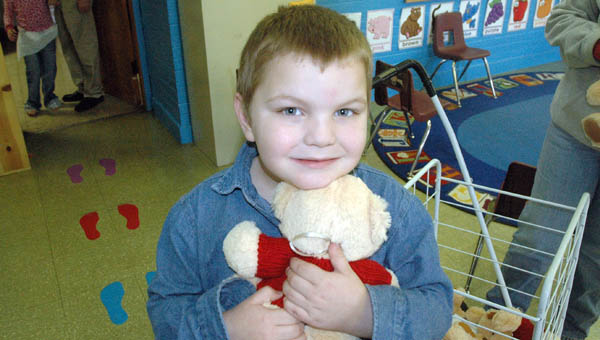 Every year, these Avon representatives spread Christmas cheer by going to nursing homes, hospitals, and schools like Open Door. The women brought plush teddy bears, each wearing a red sweater with a heart on it, from Avon to distribute to the children.

As they went around from classroom to classroom with their cart full of bears, the children at Open Door smiled with surprise at their cuddly Christmas gift, squeezing and hugging the bears.

Sharon Smith said she and her fellow Avon reps have been doing this, a project started by her district manager, for the past 11 years. Each year they order stuffed animals from Avon, around 1,000, and give them out to children and the elderly, people who Smith said may not get anything for Christmas otherwise.

“We can’t be more appreciative of it,” said Tim Nunnery, public relations director for the Lawrence County Board of Developmental Disabilities. “They love it. As long as it makes the kids happy.”

This year was Kathy Bentley’s second year distributing the stuffed animal with Avon, but her first year going to Open Door. It was an experience that brought tears to her eyes.

Another Avon rep who remembered the beginnings of the program, Patty Earl, said, “It’s a rewarding experience, especially when you see the kids grab them and hug them.”

Earl also said they give a special bear to the first baby born in Cabell Huntington and St. Mary’s Hospitals on New Year’s Day.

Charly Earl, a freshman at Fairland High School, also helped with the distribution as part of a child development class.

“It touched me,” she said. She also said she would help with the project again in the future.

Smith said they purchase the stuffed animals every year, even if they don’t get enough donations. She said donations are being accepted for next year’s giveaway. To contact Smith, call 646-1332.

Smith also said the will keep the project going, “every year as long as I’m around.”