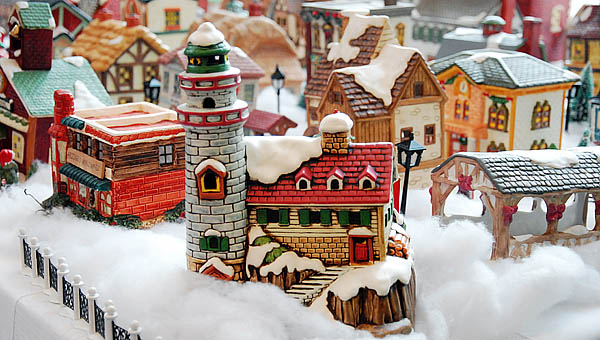 From the church, school, various shops and random homes this English village can be scene on display at the Briggs Lawrence County Public Library Main Branch.

There’s the house where Bob Cratchit lives looking as inviting as an overstuffed chair. Nearby is a tiny village church standing as tall and undaunted as the impressive stone cathedral with the requisite bell tower that’s across the way. Everywhere in the cottony snow are children playing or families taking horse-drawn carriage rides.

That everything here is only four or five inches high, all in brightly painted ceramics, does nothing to diminish the sense of contentment such Christmas scenes inspire.

It took Ena Bridges more years than she can count to collect her English village. Her motivation? Nostalgia. Remembrance of things past. It’s what home looked like, growing up in England.

“It resembles old-time English homes,” Bridges said. “I collected it a piece at a time over the years. It grew to where we ran out of space. I had built-in cabinets in the walls of the stairs.”

For years her miniature village held a special place in her Center Street home in Ironton, where Bridges came in 1944, the city’s first war bride. That move came after she married a young Army man from Kitts Hill, Ray Massie, in her home church at High Wycombe, near London, on Dec. 18, 1943.

“He was stationed at my hometown with the 8th Air Force,” she said. “Eight months later I came home for lunch and my mother had a telegram from the American Embassy telling me to report there that evening at 8 p.m.”

She was on her way to America. The 18-year-old took a train into bombed-out London, where sirens day or night could shriek out warnings of dreaded air raids. At the embassy she was told to get ready to leave for the United States. 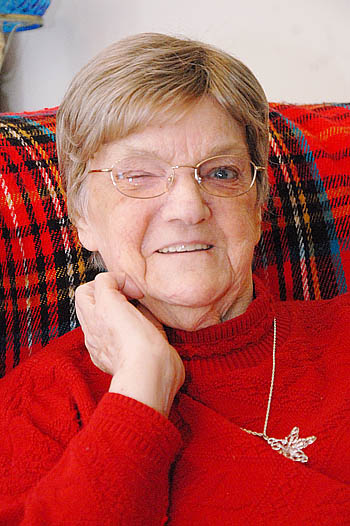 Ena Bridges, seen at her home in Franklin Furnace, has given the library a little piece of her homeland.

“I had to leave my hometown at 5 a.m. I was by myself. It was wartime. I didn’t have a chance to say goodbye to anyone,” Bridges recalled. “I got on this train, there was no luxury about it and the next day at noon got off at Glasgow.”

It took her two weeks to get from her home village to where she would board a ship to come to America.

“It was 10 days crossing the ocean on a troop ship that had to zig zag to avoid enemy submarines,” she said.

On Sundays the ship’s chaplain held church services in the dining area of the ship. She still has the prayer book he gave to her during the voyage.

When she got to New York City, she was met by a group of chaperones who got her a room at the YWCA. Then she and a couple of other war brides took in the sights.

“We went to a restaurant to get a bite to eat, went to the top of a skyscraper,” Bridges said. “When we got there, the air raid siren went off. That’s what we had been living with in England. But it was only a practice.”

From New York she went to Columbus, then Ironton, where she was greeted by her new sisters-in-law, strangers until that moment.

She lived with a sister-in-law in Ironton until her husband got leave to come back to the United States. For their first Christmas together Ray took his bride down to Miami Beach where she marveled at the balmy city all aglow for the holiday.

“There were lights in the palm trees,” Bridges remembered. “(In England) everything was basic necessities. We were really rationed hard. But we managed.”

This Saturday Ena and Ray would have celebrated their 67h wedding anniversary, but sadly her soldier died in 1962. Bridges continued to live in Ironton until recently when she decided to close her Center Street house and move in with her son, Daniel and his wife. That’s when she started looking for a home for her village. She found it at the Briggs Lawrence Library.

Now the village takes over the front window downstairs at the Ironton branch and will stay up for the holiday season.

Recently her son gave her a surprise trip to the library to see its new acquisition.

“There was the village,” she said. “It was really beautiful.”

SOUTH POINT — The students in the Open Door School bell choir have been busy spreading Christmas cheer around the... read more